Our colleague, who has been chosen as the Haggar Fellow, is a gifted teacher, devoted to liberal learning.  It’s a devotion that constantly looks for the unity of the different arts and sciences.  It’s a learning that strives to integrate academic pursuits with the flesh and blood personal realities of friendship, family, politics, and religion. 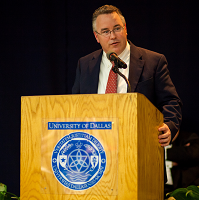 Our Fellow is an amiable teacher who believes in his students’ desire and capacity to engage the deeper questions of life.  It is not rare to find students declare that his class was “probably my favorite course this semester.” In their reviews they characterize him as lucid in his explanations, fair in his evaluation, and eager to engage thoughtful interchange.  These sorts of remarks come from students, enrolled in a surprisingly wide variety of courses, in the Core, in the Major, and in Graduate Studies.

Before I continue, let me put aside the coy veil of expectation, and say that our 2016 Haggar Fellow is Matthew D. Walz.

In the field of scholarship, Matt Walz is a fine scholar. He published a genuinely fresh and illuminating translation of the Proslogion, which is the masterpiece of its 12th century author, Anselm of Canterbury.  Aided by Matthew’s scholarly apparatus, the reader can begin to appreciate the remarkable degree to which Anselm’s philosophical thought was an organic part of his life as an abbot and monk.  In fact, what he has done with Anselm in this beautiful little book, is a hallmark of Matthew’s own life as a professor, husband and father, colleague and citizen.

His published articles range over Aristotle, Augustine, Boethius, Anselm, Aquinas, and Bonaventure.  Two characteristics mark his work.  The first is attention to the rhetorical intent of the work at hand and to the details of language, be it Greek or Latin.  And the second is a discernment of the strains of perennial wisdom to be found in the thinkers he studies.

As a member of the University community, Matthew forms part of a group of colleagues, who not only teach well, but deliberately and persistently reflect on the meaning of liberal education.  His judgment and constructive approach have made significant contributions to the Faculty Senate, to faculty search committees and departmental deliberations, and in a particular way, to the QEP Committee in which he played a central role.

In the field of service, his most enduring contribution may well prove to be his academic advising.  Each year Matthew advises between 50-60 students in the Philosophy and Letter’s program, which provides the intellectual formation for young men preparing for the Catholic priesthood.  In addition to ordinary advisor duties, he is obliged to make periodic reports that aid the seminary in assessing each of the young men’s academic character and progress.  His care for his advisees also aids them, his advisees, in discerning and shaping their own vocations.

May I also add a word of gratitude to Matthew for his ready wit and infectious laughter – surely, a boon to any community.

Our Fellow’s name is now entered as the 31st in the roll of Michael A.  Haggar Fellows.  Although each year we lift up but one among us for this award, still, in this one, we celebrate and honor the totality of those collected aspirations, talents, and virtues that center the life of this University Faculty.