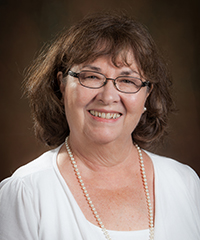 The University of Dallas 2017 Michael A. Haggar Fellow is awarded this year to a colleague who has distinguished herself in her dedication to her students, her contributions to the academy, and her service to the Church as well as the university.

This year’s fellow is known as an enthusiastic and caring teacher, whose courses are regularly described as life changing. Students comment on her ability to bring her academic subject alive and transform the way they see and understand the world. This achievement is all the more remarkable given the variety of students with which she is asked to work. With undergraduate students, she leads them in their capacity to integrate the intellectual virtues that they have established in their core courses with the theological knowledge they have developed in their major, which is then brought to bear on the concrete pastoral problems that face the life of our Church today. With her online students, she is able to project her presence across the ether in order to engage and transform future lay ecclesial ministers.  She has also worked with many students on internships and capstone projects – always reminding them that truth, wisdom, and justice are brought to their fulfillment in concrete service to one’s neighbor.

Our Haggar Fellow came to the university in 2009, after already establishing a national reputation for herself as a pastoral practitioner, researcher, and scholar. She served as the national director for the Emerging Models of Pastoral Leadership project, which conducted one of the largest ever studies of parish ministry in the U.S. Catholic Church. The findings of this research were published in a series of volumes which made a significant contribution to our understanding of successful parish leader and continue to be widely cited in the field of Catholic practical theology. Her 2013 book, Navigating Pastoral Transitions: A Parish Leaders Guide, won the Catholic Press Association award for best Professional Book. She is also a widely sought after presenter at academic and professional conferences and an ecclesial consultant. She has also won several national awards for her scholarship and service to the Church, including lifetime achievement awards from the Association of Graduate Programs in Ministry and the National Association of Lay Ministers.

This same spirit of service that characterized her work with students and the Church has been on display at the University of Dallas. She is described by those who know her best as an ideal colleague who is always willing to share her time to discuss a pedagogical problem or talk through a theological issue. She has served with dedication and humility on a variety of university committees, including the QEP Committee, the Fairness and Equity Committee, the Faculty Senate, and the Rank and Tenure Committee. She also took over this year as the director for graduate and undergraduate programs in the Neuhoff Institute for Ministry & Evangelization. She truly embodies the Neuhoff mission of theological education for transformative service in every aspect of her work.