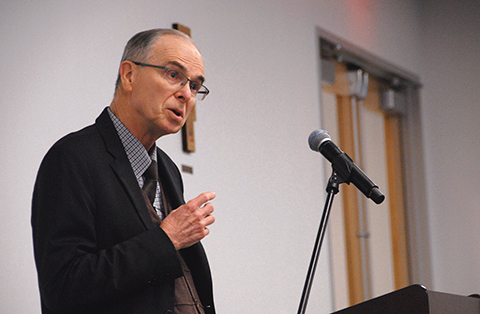 “The end of our work is truth ... just as it says in the first sentence of the university’s mission statement. It enjoins each of us to play our part. It also calls us, as a university, to encourage one another in our efforts to see and hear and give expression to reality as it discloses itself to us, each in our own disciplines and fields of interest,” said Professor of Philosophy (and 2017 King Fellow) William “Bill” Frank during UD’s 33rd King/Haggar Haggerty Faculty Award Ceremony on Tuesday, Jan. 16, 2018.

Awards presented during the prestigious event recognize and honor faculty who have gone above and beyond in their commitment to the university and to their students. As last year’s recipient of the university’s King Fellow Award, recognized for his exemplary commitment to “teaching, service and scholarship,” Frank delivered the opening address, titled “The End of Our Work,” to his colleagues.

“One reason our students come to us is because they want to know more. In this respect, success as a student requires mastering a great deal of information, skill and technique,” said Frank. “But their success will be greater if, by the end of their time with us, they have learned to play their part as witnesses to the truth.”

Frank’s 2018 successor for the King Fellow, which honors a senior faculty member with more than eight years of service, is Professor of Psychology Bob Kugelmann, PhD ’78, an internationally recognized scholar who has authored more than 40 peer-reviewed articles during his nearly 40 years of teaching at UD. As this year’s King Fellow, Kugelmann is “admired for his erudition and his ability to see into the eyes of the soul, as well as the soul of the eye.” His list of accomplishments includes serving as chair of his department, on innumerable committees and on the Faculty Senate, as well as being strongly formative in the Human Sciences in the Contemporary World major.

Described as a “wonderful teacher … respected for his intelligence, knowledge and high expectations,” the recipient of the 2018 Michael A. Haggar Fellow, awarded to a junior faculty member with eight or fewer years of service, is Assistant Professor of Spanish Jose Espericueta. Espericueta serves as director of the Latin American Studies concentration and organizer of the university’s Cesar Chavez Day celebration; among his colleagues, he is recognized as a “distinct and important voice on campus” who can help lead UD as a Catholic liberal arts university, engaging “the complex issues of our times.”

In 1981, the Carl B. and Florence E. King Foundation and the Haggar Foundation helped to create the King/Haggar Faculty Development Endowment, which made both the King Fellow and Haggar Fellow awards possible and included funding for summer research stipends. Provost Jack Paynter instituted the first awards ceremony in 1985. Both awards, which are selected by the faculty development committee from faculty nominations, are considered the highest faculty honors, and each recipient must have made a significant contribution to the university through scholarly work, through excellence in teaching and as an exemplary colleague.

Blake Frank, associate professor of management, was the recipient of the Robert G. Lynch Lifetime Contribution Award, due to his history of outstanding service not only to the Gupta College of Business, but to the entire UD community.

Jenny Gu, assistant professor of finance, received this year’s Impact Award as a master teacher and former recipient of the Haggerty Teaching Award.

Dale Fodness, associate professor of marketing, received the Innovation Award as an outstanding professor who has consistently employed novel and innovative teaching methods to achieve success in student learning in the classroom and online.

The 2018 Haggerty Teaching Excellence Awards — supported and made possible by the Patrick and Beatrice Haggerty Foundation and determined by student and alumni votes — recognized the following faculty for their dedication to and excellence in teaching: