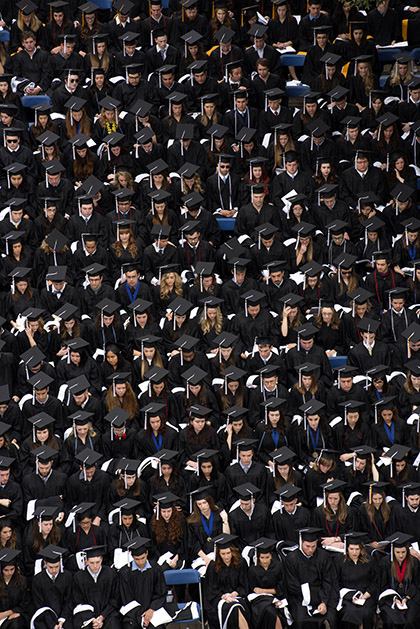 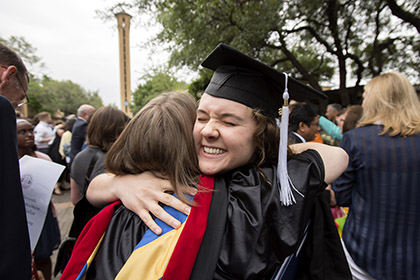 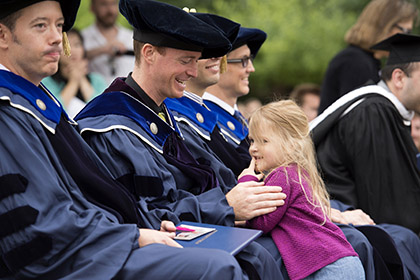 Droves of students, parents and families arrived at UD over the weekend to celebrate and participate in this year’s 57th annual commencement ceremony. Commencement was a cool surprise to most, too, compared to Texas’ typically already blisteringly hot May mornings. From the Braniff Memorial Tower to the Braniff Graduate Building to the Cap Bar, outdoor chairs filled up quickly Sunday morning as graduates, professors, families and friends flocked to claim them and rejoice in the culmination of these years of intense academic endeavor.

Allen’s address to the Class of 2016 was also deeply Catholic — giving us a history of the faith and calling on UD graduates to become a new generation of Catholic leaders prepared to solve yesteryear’s problems.

After Allen’s address, graduate candidates for the Braniff Graduate School of Liberal Arts and the Ann and Joe O. Neuhoff School of Ministry were presented by Provost C.W. Eaker and Associate Provost John M. Norris. Next, President Thomas W. Keefe, Bishop Kevin J. Farrell and both Dean of the Braniff Graduate School Joshua Parens, Ph.D., and Dean of the Neuhoff School of Ministry Theodore Whapham, Ph.D., confirmed the graduate degrees and the students.

For the highest cumulative grade point average in the Class of 2016, First Honors went to Laura Marie Binagia, BA ’16, and Second Honors went to Kathryn Louise Mihaliak, BA ’ 16; the Helen L. Corbitt Awards for Excellence were awarded to Emily Paige Lataif, BA ’16, and Alan Adolfo Kunz Lomel, BA ’16, for their excellence in academic pursuits, student activities and service to the university; the Ann Heller Maberry Award was presented to Grace Ann Smart, BA ‘16; and Lauren Elizabeth Pauletti, BS ’16, was awarded the Cardinal Spellman Award for modeling the highest ideals of the university.

After the awards, Valedictorian for the Class of 2016 Kathryn Louise Mihaliak tugged at the heartstrings of her classmates with her reminiscences of her pilgrimage through UD.

“UD has made us comfortable with heaven, and even more desirous of reaching it,” said Mihaliak. “We know that our journey has just begun, and that at the end we will be together once more.”

The three-and-a-half-hour ceremony was arguably the shortest commencement in UD history. The entire celebration was over before noon.

As the last graduate received her diploma, the Braniff Memorial Tower bells began to toll, and the Mall became a madhouse, packed with families and friends, professors and (now) alumni.