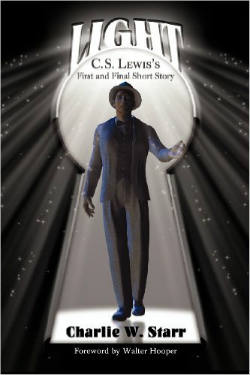 In 1985, more than twenty years after the death of C.S. Lewis, an unknown manuscript was published. This manuscript was a version of a previous short story by C.S. Lewis, “The Man Born Blind,” published in 1977. What adds mystery to this situation is this: the story was accused of being a forgery.

In Light: C.S. Lewis’s First and Final Short Story, Charlie W. Starr, Ph.D., M.A. ‘90, explores these questions and reaches a conclusion that disproves much of what Lewis scholars have held to be true.

Starr teaches English, Humanities, and Film at Kentucky Christian University in Eastern Kentucky. He writes a monthly column on Christians and the Arts and Media for Lookout magazine and has published five books.

In this book Starr explores questions surrounding the unknown manuscript that suddenly appeared two decades after C.S. Lewis’ death, ultimately revealing that what Lewis scholars had previously believed about the story’s origins was largely inaccurate and that this story provides a new key to understanding some of Lewis’ most profound ideas.

“That an unknown manuscript by the 20th century’s most famous Christian author should suddenly appear out of seeming nowhere more than 20 years after his death is definitely astounding,” said Starr. “That this manuscript is a piece of fiction by the author of such beloved works as ‘The Chronicles of Narnia’ and ‘The Screwtape Letters’ is remarkable. That this short story turns out to be a version of a previously published C.S. Lewis story which some have accused of being a forgery transforms the remarkable into mystery.”

This book includes the entirety of “Light” and then launches into an investigation of authenticity and meaning. This book, with praise from a multitude of Lewis scholars, is a must read for C.S. Lewis fans and critics alike.