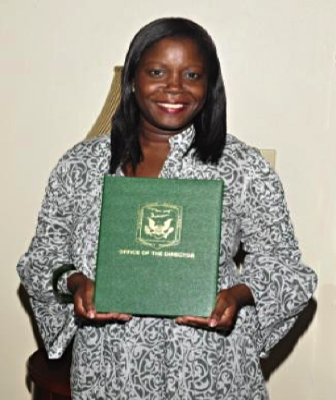 A native of St. Kitts and Nevis in the Virgin Islands, Williams grew up in a culture where her “independent thinking” wasn’t much appreciated. She found a home at UD, where she received a master’s in politics.

“I must note that the UD environment was new to me,” said Williams. “Growing up in a culture where one is taught what to think, where regurgitating what was taught was viewed as superior intelligence, where not questioning the status quo was the order of the day, and most importantly where patriarchy ruled supreme, I viewed my time at UD as quite liberating.”

Her politics professors didn’t want her to simply regurgitate their words.

In the decade since leaving UD armed with the confidence to “question everything,” Williams’ many experiences have included teaching Catholic school, representing her country’s interests on the United Nations Educational, Scientific and Cultural Organization (UNESCO) executive board in Paris, France, and training with the Virgin Islands Territorial Emergency Management Agency.

“Education not used to enlighten, better or uplift others is useless,” said Williams. “This is one of the many lessons I learned at UD.”