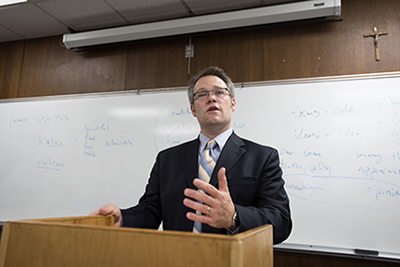 On the evening of Sunday, Sept. 18, the University of Dallas Politics Department hosted its annual Constitution Day celebration in upstairs Haggar.

UD's first Constitution Day celebration was organized 41 years ago after a student remarked to Professor of Politics Leo Paul de Alvarez about the lack of opportunities for students to sing patriotic hymns.

“We decided to make an occasion which could be a part of our education in the American political tradition,” said de Alvarez several years ago during Constitution Day.

UD’s Constitution Day tradition began well before U.S. Congress’s 2004 law, which required publicly funded schools to celebrate the national holiday. Since the initial idea, UD's Constitution Day has become an enthusiastically anticipated annual event on campus — during which students, professors and families congregate to celebrate. This longstanding tradition promotes an understanding of American heritage and of our Constitution.

The Constitution of the United States has remained the oldest written constitution in unbroken effect since its ratification. Though this 41-year-old celebration is significantly younger in comparison to our Constitution’s 229 years of being, UD’s Constitution Day tradition has continued to uphold the ideals of the American founding.

This year’s celebration began with a brief address from Department Chair and Professor of Politics Richard Dougherty, Ph.D., who outlined the yearly tradition from its inception at UD over 40 years ago to our present day. Dougherty noted that many alumni have begun similar celebrations around the country after departing from UD.

“[Constitution Day] is the event of the year. It really is,” said Dougherty, according to The University News. “It’s early in the year, so it brings people together early on. It’s a joyful event.”

Following Dougherty’s words, the assembled crowd recited the Pledge of Allegiance and, accompanied by piano and drums, sang “God Bless America” and “The Star-Spangled Banner.”

After food was served, Director of International Studies and Associate Professor of Politics Jonathan Culp, Ph.D., gave an address, titled “What Does 2016 Have to Do with 1787?” This was Culp’s eighth UD Constitution Day, and it was his first time to speak at the celebration.

With Election Day looming, Culp’s emphasized why the first principles of our founding are still of great importance today.