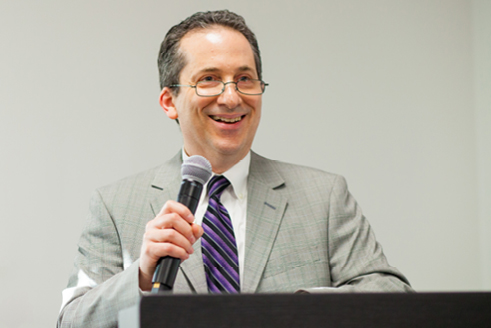 While the University of Dallas has long promoted the liberal arts, it proved its leadership in the international movement to revive classical education earlier this month, when Joshua Parens, Ph.D., dean of Braniff Graduate School, served as one of the plenary speakers at the European Liberal Arts Conference.

In partnership with the Association of Core Texts and Courses (ACTC) and held at the University of Winchester, the conference brought together scholars and educators from around the globe to discuss the importance of a traditional liberal arts education. The only plenary speaker representing an American university, Parens gave an address titled “Rethinking the Relation between Core Texts and Liberal Arts, Philosophy and Rhetoric,” in which he underscored the importance not only of studying the core texts, but also of cultivating the skills that enable students to invent such works themselves. While some tend to focus exclusively on the texts at the expense of learning these arts, Parens encouraged his audience to “heed the call to engage in the arts not merely as traditions but as arts of invention.”

"Heed the call to engage in the arts not merely as traditions but as arts of invention."

Parens’ interest in the revival of liberal education began during his undergraduate years at St. John’s College, a school that, like UD, centers around the great books of the Western tradition.

“I was thrown into the deep end, reading these texts without much training,” he said, recalling an experience that revealed how a solid understanding of the arts is essential in engaging classical works.

He added that he again felt this “deficit” in training in the arts when creating Braniff’s classical education program. He found a solution in Aristotle’s Rhetoric, a work that further “fed into” his interest, inspiring him to explore more deeply the relation between the core texts and liberal arts.

According to Parens, UD is not merely a participant in the movement toward a resurgence of the liberal arts; it is one of its strongest leaders, with Braniff Graduate School at the helm. At the yearly conferences held by the ACTC, an organization for which Parens serves as board member, Braniff boasts the highest number of graduate students attending. Parens credits this strong attendance to an enduring collaboration between the Institute of Philosophic Studies (Braniff’s Ph.D. program) and the ACTC.

In the summer of 2016, Braniff launched its Master of Humanities in Classical Education. It did so at the request of Great Hearts Academies, and it now offers the first master’s degree in the U.S. dedicated to educating kindergarten through 12th-grade teachers in the liberal arts and core texts.

To Parens, this liberal education in the core texts is more than a matter of curriculum requirements; rather, it is a process of learning that shapes one’s life.

“There isn’t much reason to study what we study unless we’re interested in living well,” he said.

This classical model of education counters the modern education system, in which he said “there is a deficit in concern for living well.” The student in the standard university tends “either to muddle through distribution requirements and risk not covering anything that holds together or counts as a whole . . . or to plunge down into specialization.” He went on to explain, “In the modern world, we’re prone to becoming like cogs in a great machine. Specialization can do that.”

It is this dangerous outlook that the liberal arts revival combats, offering instead an education not for machines, but for the human person. Such an education brings the student to encounter truth, goodness and beauty through classical texts, while at the same time acquiring the arts that made such texts possible. The end result is not simply a scholar who can appreciate the core texts of old, but an artist who can further add to this tradition, thus ensuring that the liberal arts will last for generations to come.

Interested in joining the movement to revive liberal arts education in the core texts? Discover UD’s Master of Humanities in Classical Education.