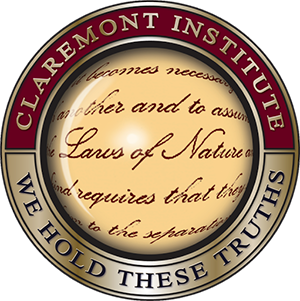 Before co-founding one of the nation’s most recognized conservative consulting  agencies in the Lone Star State, alumnus Ross Hunt, PhD ’16, withdrew from his doctoral studies at the University of Dallas, shelving his dissertation on the verge of graduation — to return nearly a decade later.

As one of 14 recently announced Claremont Institute Lincoln Fellows, Hunt now joins the ranks of some of the nation’s most influential professionals working in politics. The Claremont Institute’s Lincoln Fellowship provides a forum for discussion, collaboration and insight into how the conservatism, statesmanship and political thought of America’s founding should help guide today’s policymakers, bringing together some of the country’s most prominent young professionals working in politics, policy, journalism and law.

“There were a lot of early mornings,” recalled Hunt, reflecting on his return to UD in 2016 to complete his dissertation on “Cyropaedia” (meaning the “Education of Cyrus”) by the ancient Greek philosopher Xenophon of Athens, thereby earning his doctorate in political theory from the Braniff Graduate School of Liberal Arts Institute of Philosophic Studies (IPS).

“One of the greatest gifts I gained from my education at UD was a perspective in political theory that provides a foundation and framework for our firm's application of statistical prediction,” said Hunt, after paying tribute to his UD education and mentors Leo Paul de Alvarez, professor emeritus of politics, and Tom West, professor of politics (now director and senior fellow at the Claremont Institute).

In 2009, with classmate Matthew Larry Brownfield, MA ’08, Hunt co-founded Nasica Consulting (named after the Roman statesman Publius Scipio Nasica), and the pair began running legislative campaigns for conservative candidates throughout the state. Hunt and Brownfield’s partnership grew over the years as they tallied up win after win in Texas’ heated political furnace, finally evolving into Murphy Nasica & Associates in 2013.

Almost immediately after its founding, Murphy Nasica & Associates became the largest and most successful political consulting firm in the state, campaigning and consulting for prominent politicians in Texas and across the country, with clients such as Texas House Speaker Joe Straus, Governor Greg Abbott and the California Republican Party.

Among his many accomplishments, Hunt directed the invention of statistical models of voter turnout and political opinion that were instrumental in securing the Republican majority in the Texas State Legislature, aided in the elimination of a Democratic supermajority in the California State Legislature in 2014 and supervised the development of political campaigning applications, including the award-winning canvassing app Cyrus Mobile (named after Xenophon’s fictional biography of Cyrus the Great).

“Having an understanding of the principles that underlie the political regime makes it possible to predict and grasp outcomes that can never be understood by traditional polling models,” said Hunt. "Only by recognizing which political ends and principles are not subject to deterministic calculation is it possible to intuit the limits of statistical modeling."

In 2016, Murphy Nasica & Associates grew to 38 employees, collaborating on 151 campaigns for Republican candidates and conservative action groups in 15 different states. According to Hunt, they project running anywhere between 200 to 250 campaigns in the next year.

The only political campaign consultant to earn this year’s prized fellowship, Hunt remains a pioneer among his colleagues. 2017 Lincoln Fellows include writers and editors for the The New York Times, Weekly Standard, American Conservative and Conservative Review, senior staffers for Senators Tom Cotton (R-AR) and Rob Portman (R-OH); as well as current and former policy experts from the The Heritage Foundation and Texas Public Policy Foundation.

“Claremont has always prided itself in finding the best and brightest rising conservatives and providing them with a firm understanding of the enduring truths articulated in the Declaration of Independence,” said Claremont Institute President Michael Pack.

The Claremont Institute was founded in 1979 by students of Professor Harry Jaffa, with the goal of studying and teaching the principles of the American Founding to the next generation of conservative leaders.

To learn more about the Claremont Institute Lincoln Fellowship, visit www.claremont.org.
Discover the University of Dallas Institute for Philosophic Studies at udallas.edu/phd.