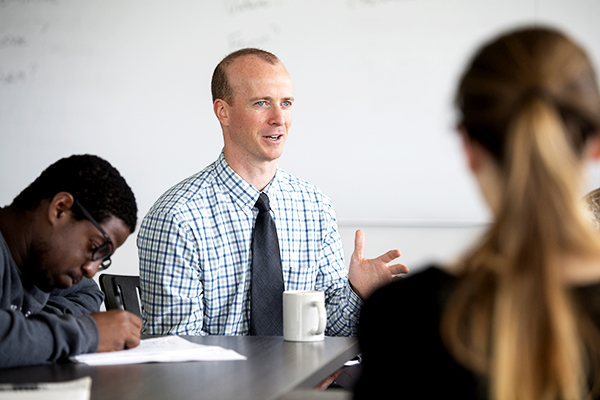 Scott Crider, Ph.D., professor of English at the University of Dallas, and Matthew Spring, affiliate assistant professor of English, are writing a new book titled A New Trivium: 100 Things to Know for College – and Life! The work is devoted entirely to the trivium and how a classical education applies to the academic and social lives of college students through the liberal arts.

Both authors agree that the stakes are high when it comes to pursuing a classical, liberal arts education.

“The more we attend to the arts of grammar, logic, and rhetoric, the more present we can become to our colleagues, classmates, friends and family members.”

“Such an education,” Crider said, “is arguably necessary for happiness.”

For Crider, the centrality of the arts is most pedagogically insightful through the trivium: English grammar, traditional logic, and classical rhetoric. These three “liberal arts of language” inform one of the most important social activities humans participate in – conversation.  “The more we attend to the arts of grammar, logic, and rhetoric, the more present we can become to our colleagues, classmates, friends and family members,” said Spring.

The idea for the book emerged from two courses taught at UD: the trivium and the seven arts of language, as well as an article written by Crider – “Why My Favorite Nun Was Right: The Recovery & Renewal of the Liberal Arts of Language.” Crider, who was at one point Spring’s teacher, has enjoyed collaborating with him on the project. “It's very exciting to be co-authoring a book with my student, colleague, and friend Dr. Spring,” Crider said. “We've written a third to a half of it so far.”

Spring too has gained insight from working with not only a friend, but a mentor who excels at the art he teaches.

“In addition to being an accomplished writer and inspired educator who has mentored me from my first semester at UD, Dr. Crider has become a friend whose company I seek. He instills conversation simultaneously with joy, gravitas and wisdom,” said Spring.

A classical education is the the primary tool for refining the art of conversation, and many schools nationwide have adopted a liberal arts curriculum to better preserve that art. Crider became aware of the growing number of schools offering a classical education through his first book, The Office of Assertion. While classical charter schools have expanded at a more rapid pace, classical ideals have re-emerged in Catholic and private schools as well. And, although the University of Dallas has always been committed to studying and extending the liberal arts tradition, the renewal of liberal learning has both been changed by and is increasing in scope within UD’s academic purview. 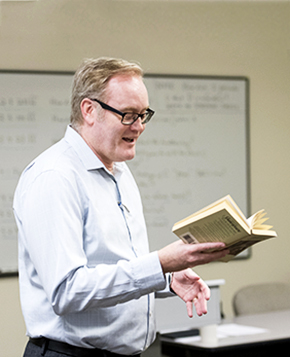 “It is influencing, and is influenced by, colleges and universities like UD that are classically oriented. The Classical Education Graduate Program that Dean [Joshua] Parens and Assistant Dean [Matthew] Post have invented and cultivated is a part of this renaissance, bringing the UD education to more and more teachers and, I hope, demanding of us at UD that we take the arts more seriously than we sometimes do,” he said.

“Ours is not the only model of liberal education, but it is a very good one,” Crider said. “Our graduate degrees and certificates in classical education, in concert with our Education Department, are an important part of this educational renaissance.”

For Crider, UD contributes to the overall goal of human flourishing in its mission to both study and extend the work of Western civilization through the process of classical education.

“The value of a classical liberal education is that – in learning arts of language and number, and exercising them in response to the greatest events, experiments, texts, artifacts, and equations in the tradition – the student actualizes his or her intellectual potential to contribute to the tradition and is prepared to flourish as a free and dignified person.”