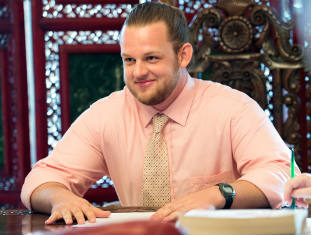 Rhett Forman, Ph.D. ’17, is bringing the mission of the University of Dallas westward, to Stephenville, TX. He has been appointed by Tarleton State to design a general studies major, which he hopes to model after the curriculum he observed at UD.

While a doctoral student in UD’s Institute of Philosophic Studies, Forman was the director of UD’s Writing Lab in the 2016-17 school year, a position he credits as critical to getting hired to his current role at Tarleton State. From UD, Forman took an adjunct position in Southern Methodist University’s Discernment and Discourse program. Due to program changes, however, Forman’s position was eliminated, leading him to launch a broad job search.

“After applying to tenure-track, non-tenure-track, and adjunct jobs across the country, the one school that I was attracted to the most was the one school that asked to interview me: Tarleton State University,” Forman said. “I had a great-uncle who was a professor of animal science at Tarleton, and I was awed by the prospect of carrying on his legacy and of helping Tarleton develop a liberal arts undergraduate major. So, if SMU had not laid me off and if my great-uncle, whom I never met, had not spent a lifetime teaching at Tarleton, I would never have applied to or gotten the job. I chalk that up to the right time, the right place, the right preparation and a whole lot of providence.”

Forman’s job at Tarleton will require serving a different constituency than the community he was a part of at UD. Many of Tarleton’s students are considered non-traditional, having already established their lives in regards to both work and family life. That aspect, combined with being a state institution as part of the Texas A&M University system, requires that certain regulations will have to be met.

For instance, each course must have both an online and an in-person version. There will also be some form of career training to appeal to future employers. This requirement Forman plans to fulfill in a capstone course he’ll be teaching next year.

While there are regulations that must be met, Forman wants to give Tarleton an experience heavily based on the classics.

“I certainly will carry with me my esteem for the Western tradition and for the Great Books.”

“I certainly will carry with me my esteem for the Western tradition and for the Great Books,” Forman said. “My first goal is to incorporate six authors and texts into the program along with a selection of lyric poetry: Mortimer Adler’s How to Read a Book, Homer’s Odyssey, the Book of Job, Plato’s Meno, Aristotle’s Nicomachean Ethics, and Shakespeare’s Hamlet. Such a program undoubtedly resonates with the UD Core.”

Forman certainly understands the challenges of bringing a liberal arts worldview into a regulated system, and it is something that excites him.

“The great thing about liberal education, however, and the great thing about great ideas and Great Books, is that they can benefit and appeal to anyone,” Forman said. “While rendering education subservient to state law and career fields is quite the contrary of ‘liberal,’ I look forward to the challenge of tempering this concern with an inquiry into more important, lasting and fulfilling ideas. As Aristotle would say, I’ll be looking for a nice mean between two extremes.”