The Five Most Important Characteristics of Leaders

In an industry that’s riddled with weather delays, disgruntled passengers and lost luggage, Southwest Airlines was named to FORTUNE's 2018 list of the World's Most Admired Companies. What’s more impressive than being the only commercial airline among the top 10, is that Southwest has managed to stay on this list for 24 consecutive years — a feat that’s really a testament to the dedication of the airline’s 55,000 employees and starts at the top with the company’s leaders.

As president of Southwest Airlines, Tom Nealon’s, MBA ’87, influence extends across all areas of the company — from overseeing much of the airline’s daily operations to advancing the corporate strategy and mission. A graduate of the University of Dallas Satish & Yasmin Gupta College of Business, Nealon draws on the balance of business, leadership and ethical principles that are the foundation of his MBA to lead the organization forward.

Since graduating from the University of Dallas, Nealon has held senior leadership positions at Frito-Lay, JCPenney and Southwest Airlines. A thoughtful and articulate voice on the subject, Nealon shares his vision of the five most important characteristics of leaders.

As a leader, your team needs to know that you’re willing to work together and support them.

“I think humility is a big deal. A humble leader, to me, is someone who actually learns from other people and listens to other people,” said Nealon. “From my experience, I’ve never wanted to work for an arrogant person. That type of leader will sell themselves and their team short.”

True humility is not just how you treat others, but it’s also how you think about yourself and those around you. Nealon suggests asking yourself: “Do I always view myself as the smartest person in the room? Am I listening to others?”

If your team believes that you’re taking the time to listen to them and making decisions that will benefit your entire team, they’ll have a great deal of respect for you. 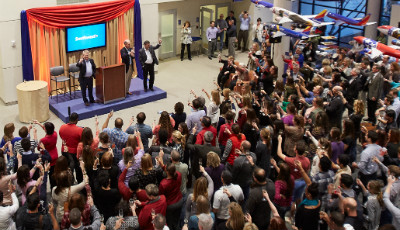 Successful leaders commonly exhibit a love of or care for people. Take a genuine interest in seeing your team succeed and grow personally, as well as professionally.

“As a leader you have to really care about people,” said Nealon. “And it’s not that you have to know every person's name, but there has to be a courtesy toward — and a genuine interest in — the people in your organization.”

For example, Southwest Airlines has developed a culture around a love for people. From their stock ticker to their corporate vision to how they feel about your bags, Southwest has been a brand built on “LUV.”

Sometimes the right decision is not always the most popular one. It takes a courageous leader to put a vision into action.

“When you’re in a leadership role, there are going to be hard things you have to do and hard decisions you have to make, so a leader must be courageous,” says Nealon.

Be bold. Envision a better solution and a better product, and approach it with enthusiasm and determination. Communicate with your team frequently, and embrace the open-door policy. Your team will champion your efforts and become your biggest advocates.

A goal worth achieving will never be easily obtained, and challenges during your leadership journey are inevitable. Having the perseverance to push through these objections and obstacles will be key.

Courage is also a big part of perseverance. As Nealon says, “Hard things require perseverance, and leaders have to show by example the courage to keep working through the hard things because big things that are important are typically hard.”

Take the time to appreciate the opinions and ideas of your team. Practicing patience means that you are more compassionate, open-minded, willing and able to manage any circumstance.

As a veteran leader, Nealon reminds us, “Leaders have to have patience. There may be things that you would do one way, but you may have a team of younger leaders doing it another way — and by the way, their way may be better. So you’ve got to have a sense of patience.”

Listen, ask questions and approach challenges together with an open mind.

“ As a leader you have to really care about people. And it’s not that you have to know every person's name, but there has to be a courtesy toward — and a genuine interest in — the people in your organization. ”- Tom Nealon, President, Southwest Airlines

Learn more from some of Dallas’ top leadership experts.