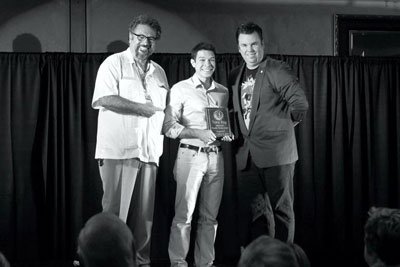 Something magical is happening on campus at UD.

Rumors of a professional magician who can read minds, make cards fly and reconstruct objects with the swipe of a palm are being floated around campus.

Some say it’s just a myth but at a recent gathering for faculty and staff at the Gupta College of Business, the magician revealed himself to be Leo Kanzelberger, BA ’18.

Kanzelberger’s first experience with magic was when he eight years old and having dinner with his family. The restaurant had a magician making his way to different tables, inspiring laughter and applause from the customers. Finally arriving at their table, the man presented the Kanzelberger family with a quarter and claimed he could make it fall in slow motion. The magician lifted the coin into the air, dropped it, and the quarter immediately disappeared. Tracing the path of the now invisible coin with his index finger, the man’s finger stopped at the table where the coin suddenly appeared, resting on the table. Kanzelberger was captivated.

He needed to know how this was possible. “That evening I asked my dad about it, and he told me something I’d never known: he’d practiced magic as a hobby as a kid too,” said Kanzelberger.

After receiving his first book of magic tricks from his dad, however, Kanzelberger found that many were too difficult at his skill level to recreate and soon quit practicing — but the itch never left him. Every day on the way to school, Kanzelberger would pass by Pike Place Market from the school trip. And every day he would wonder if the magic shop was still there, feeling he may have abandoned his passion too soon.

Years passed before his itch got the better of him.

“Finally, I couldn’t stop myself. I got off the school bus early and was determined to find the shop and give magic another shot,” said Kanzelberger.

Lo and behold, it was still there, with a wide assortment of books and materials for young magicians to learn the fundamentals of magic.

He started small this time; studied smarter. Eventually after endless hours of reading books, practicing in the mirror and studying legends of the magic industry, Kanzelberger could do several card tricks and even began teaching younger, up-and-coming magicians. Soon, he was hired to work at the same magic shop that had peaked his interest and even started to book shows around the Seattle area. He admits he didn’t get out much in high school because of the dedication he put towards his hobby, but he found a passion that he loved indulging. Since then Kanzelberger has won numerous awards most recently, Tony Eng’s 2016 “People’s Choice Award” and Pacific Coast Association of Magician’s 2016 “Close-Up Award” gold medal.

While attending a 2014 conference for magicians in Orlando, word of Kanzelberger’s innovative signature trick, which for obvious reasons we cannot reveal, began to spread. Many began asking to see his trick, and Kanzelberger happily shared.

“It’s not a particularly entertaining trick; in fact, there isn’t a whole lot happening, but it’s puzzling to the audience,” said Kanzelberger.

Among that audience was a friend of producers for the show “Penn & Teller: Fool Us,” a televised competition inviting magicians to perform tricks for the American illusionists Penn & Teller. Winning acts are invited to open for Penn & Teller’s show in Las Vegas. Several attendees, impressed with the young magician’s skills, encouraged him to submit a video. It took a lot of convincing but eventually Kanzelberger reached out to producers and submitted a video of the card trick. Shortly after, the show’s producers contacted Kanzelberger, inviting him to be on the series.

“A little part of me died,” said Kanzelberger. At the time he was studying in Italy with the University of Dallas Rome Program and couldn’t afford to miss so much time off school. “At least now I get to say I turned down Penn & Teller due to scheduling conflicts,” added Kanzelberger.

These days, however, Kanzelberger has decided to focus more on school. “I realized that the more I booked gigs or performed for audiences, it became less like of a hobby, and I practiced it less,” said Kanzelberger. “I could feel myself getting burned out.”

While Kanzelberger is now a business major in the Gupta College of Business, he began his freshman year undecided. Wanting to explore every interest, he took courses in several subjects until a girl he liked and an opening in his class schedule led him to the business school.

“I figured the best way to get her to go on a date with me was to spend more time with her,” said Kanzelberger. So he registered for the business foundations seminar taught by Assistant Professor of Marketing Robert Yale. Shortly into that first business course, he realized how much he enjoyed learning about the complexities, challenges and fast-paced culture of business.

“Professors such as Drs. Robert Yale and Laura Muñoz genuinely care about their students, and their enthusiasm for their subject matter is just infectious,” said Kanzelberger. “I enjoy the intensity you find in the college of business, and I like the feeling of having learned something new everyday.”

For now, as he continues to explore the multitude of possibilities a business degree offers, Kanzelberger says he’s fine simply being UD’s urban myth — “that guy who does that magic thing.”