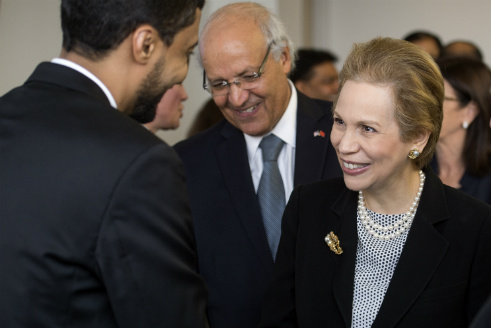 Earlier this month, the University of Dallas hosted the Moroccan ambassador to the United States, Her Highness Princess Lalla Joumala Alaoui, along with the president of Al Akhawayn University, Driss Ouaouicha.

Central to the collaboration is one University of Dallas alumnus, Mohammed Aouam, M.S. '12, whose commitment to his home country has opened up new and exciting opportunities for the university and its current and future students.

In 2006, Aouam arrived in the United States from the Kingdom of Morocco with only $300 in his possession, a little bit of English literacy and a whole lot of determination.

Knowing that education would be the key to his success, Aouam enrolled in the University of Dallas Satish & Yasmin Gupta College of Business. Seeing the growing need for cybersecurity, he jumped head-first into the master of science in cybersecurity program which, as it turns out, is something he’s quite good at.

“I fell in love with the cybersecurity program from the first day,” recalls Aouam.

During his graduate studies, Aouam began an eight week internship with the United States Department of Defense. The DoD, impressed by Aouam’s knowledge and expertise in cybersecurity, offered him a job at the conclusion of his internship.

Aouam began his career working with the DoD to carve out a new role in the emerging, but vital, field of cybersecurity. His primary role was to lead a project to connect deployed troops with their families through telecommunications technology.

“This project was great because of its purpose – to connect troops with their families. Seeing the troops speak with their loved ones was priceless and it was a ‘mission accomplished’ feeling for me and my team.”

Aouam continued to work for the DoD for over three years as he finished his master’s degree and also gained U.S. citizenship.

Now, as a successful cybersecurity strategist at AT&T, Aouam continues to use his cybersecurity education to innovate. He developed a threat management platform for AT&T, which is now one of the company's most profitable platforms, and also worked on a project to develop risk management solutions for AT&T’s business clients. Currently, Aouam oversees a strategic-focused team at AT&T in charge of cybersecurity mergers and acquisitions.

A Partnership That Started With a Question

Aouam is passionate about using his degree to help others, including those in his home country of Morocco. Two years ago he approached the dean of UD’s Gupta College of Business, Brett J.L. Landry, Ph.D., with the idea to create a partnership with one of Morocco’s top schools, Al Akhawayn University.

“We started this initiative with Morocco with just a question; ‘How can we build a partnership to share the cybersecurity knowledge we have to help Moroccans improve their businesses?’” said Aouam. “I love that fact that Dean Landry and the University of Dallas have been willing to take on initiatives like this.”

On November 15, that dream became a reality when the University of Dallas and Al Akhawayn University signed a formal partnership in the presence of officials from both schools and the Moroccan ambassador to the United States, Her Highness Princess Lalla Joumala Alaoui.

This month, Aouam joined Landry and University of Dallas President Thomas W. Keefe on an international visit to the Kingdom of Morocco to begin implementing this partnership with Al Akhawayn University.

“I didn’t even know how to speak English when I first arrived in the U.S.,” reflects Aouam. “But I learned. I was persistence and opportunities opened up for me through education. Now, I can use my story to tell other Moroccans about the opportunities available to them through education and ultimately bring hope to the country.”