Are You Ready for Some Football?

For Daniel Frid, MBA ’15, Football is More Than a Career; It's His Passion 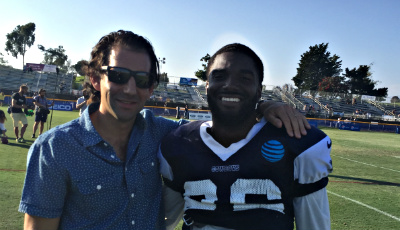 It’s been 31 weeks since the last NFL game, and football fans everywhere are ready for kickoff week. This Thursday’s game between Super Bowl LI champions the New England Patriots and the Kansas City Chiefs marks the official start of the 2017-18 season, but for one University of Dallas alumnus, this game also caps off a season of hard work.

As a sports agent for Team Sports Agency, Daniel Frid, MBA ’15, is dedicated to helping his clients — professional football players — achieve their dreams. From improving their technical skills and helping them match with the right franchise to negotiating contracts and assisting with charity events, Frid plays an important role in these players’ success.

Frid attributes part of his own success to his experience at the University of Dallas.

“While it’s important to be able to manage numbers, it’s just as important to know how to manage people,” said Frid. “The university not only provided me with the strategies and resources necessary to take the next step as a professional, but it also gave me the management skills necessary to be a leader in the business world.”

Turning a Passion into a Career

A Dallas native, Frid left Texas to play Division 1 tennis at Boston University. After graduating with a degree in business administration, he found himself trying to find a job in the midst of the 2008 financial crisis. So instead of trying to land a job in finance, as he had originally planned, Frid decided to go back to what he knew best: sports.

Back in Dallas, Frid began his career as the executive vice president at Integrated Athletic Development, one of the nation’s premier indoor athletic facilities. In this role, Frid met his current business partner, Scott Casterline.

Casterline, a maverick in the sports agency industry, has represented active NFL players since 1983 and negotiated over $1 billion in contracts for his clients. For the past seven years, Frid and Casterline have worked together at Team Sports Agency, one of the nation’s top full-service sports agencies.

“I’d met many influential people throughout my career who were UD alumni,” said Frid. “I admired the way they carried themselves and their ability to impact those around them. That was the type of leader I wanted to be.”

Once on campus, professors such as Associate Professor of Marketing Scott Wysong, Ph.D., played a huge role in making his MBA experience valuable and memorable.

“Dr. Wysong taught me lessons I could apply right away to my profession,” said Frid.

Beyond the faculty, Frid found himself welcomed with support from individuals such as his academic counselor, Michael Leshner, whom Frid describes as a “game-changer.”

After working as an agent for several years, Frid has learned that the movie Jerry Maguire only depicts a snapshot of an agent’s life. And while there is no “typical” day, a large part of his job requires going above and beyond to set their clients up for success in life after football. For example, earlier this summer Frid helped Kansas City Chiefs running back Charcandrick West host a charity football clinic to benefit the Shriners Hospitals for Children.

“Every day is a new and exciting challenge. At Team Sports Agency, we give our clients the best-in-class service in all aspects of their career and life after football. We have a commitment to our clients to be great every day.”

When asked who he thinks will win the Super Bowl this year, Frid said, “I am going with … actually, it’s too early to tell; I’m just most excited to see our clients compete and succeed!”

Learn where an MBA degree from the University of Dallas can take you.