Financial Advisor, Alumnus on the Key to Business Leadership

Sometimes taking the wrong path can lead to the right career. That's what happened to Eddie Caldwell, MBA '92, Managing Director of Northwestern Mutual Wealth Management Company. "It took me three years of working as an engineer in corporate America to realize that it wasn't for me," he said. "I learned that I wanted to work with people, not with computers and spreadsheets." Caldwell spoke recently to Business Foundations students taught by Greg Bell, Ph.D, as part of the University of Dallas' Executives on Campus program. 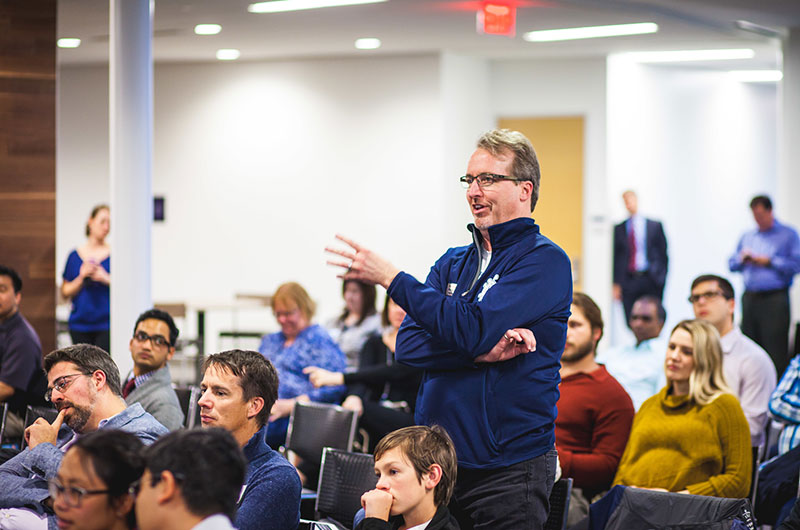 Caldwell credits UD's MBA program with showing him that there were other career avenues to pursue. "I found the financial side of things really interesting," he said. "And because the program at UD is practical and full of professors and students with real-world advice that I could apply in my own career, I felt I could make the change." Caldwell left to start a financial services practice, a career that's based on building trust and confidence. "I can't believe I get paid to do what I do," he said. "I get to meet with people I like and talk to them about their dreams and aspirations for themselves and their families. And then I get to help make those dreams happen."

The way Caldwell builds trust with his clients is through listening. "I sit down with them to find out just what it is they want to accomplish. I find out how well they can tolerate risk, and what they hope to do during their retirement years," he said. "And then I design a plan that will help them reach their goals. But the key is listening."

Listening also plays an important role in Caldwell's other responsibility at Northwestern Mutual, that of a manager whose goal is to recruit new financial advisors who are just as passionate about serving clients. "I love what I do," he said. "And I want to recruit people who I can motivate to be the best they can be. The only way I'll find out what motivates them is to ask and listen."

Caldwell added that he has grown into his role as an effective leader through trial and error. "I made some mistakes along the way," he said. "And the biggest was confusing management and leadership." A manager, Caldwell said, will make sure that his or her team is functioning on a day-to-day basis. "But leaders are different," he said. "Leaders look to the future and ask, 'Where are we going?'"

According to Caldwell, another key characteristic of good leaders is that they learn what motivates their team members. To that end, he takes time out of every week—undisturbed "think time"—to thoughtfully consider each of his team members: what motivates them, what excites them, what they really care about. "Good leaders help their team members achieve at their highest capacity," he said. "The number one test of leadership is to look behind the leader to see if anyone is following."

Caldwell recommended that students look for just such leaders when they begin their careers. "Look for the leaders you want to follow in an organization," he said. "Affiliate yourself with them and they will help you to be successful." In the meantime, Caldwell advised students to build a strong foundation while in school by learning as much as they can about as many things as they can. "You're laying the groundwork now for what the rest of your life is going to look like," he said. "You may not be able to plan every step but you can build the foundation that everything else will rest on."

The University of Dallas Executives on Campus program was founded to further the University's mission of providing practice-based education, by inviting successful business leaders to share their experience with graduate and undergraduate students in the classroom. Through this program, alumni, business leaders, and their companies are invited to partner with the University in our shared pursuit of management excellence.