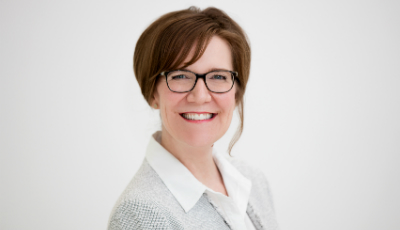 Last year, Satish & Yasmin Gupta College of Business alumna Kristen Pressner, MBA ’99, took a leap of faith. In front of a live audience and the virtual TEDx community, she publicly admitted that she had an unconscious bias toward women leaders, despite being a woman leader herself.

As the global head of human resources for Roche Diagnostics, the world leader in in vitro diagnostics and a division of Roche, the world’s largest biotech company, Pressner’s role makes her willingness to share her bias all the more surprising. After all, could it ever be considered a best practice for an HR executive to admit they’re biased?

Pressner discovered her unconscious bias after contrasting her responses when, within the same week, two members of her team — one male, one female — asked her to review their compensation. Her initial reaction to the male coworker’s request for a salary review was something along the lines of, “Yeah, I’ll look into it,” but to her female coworker her automatic response was, “I’m pretty sure you’re good.”

At the time, these brief conversations didn’t raise any internal red flags, but a few days later, she realized that her different reactions to the same question may have been due to an unconscious bias she has toward seeing women in a leadership role.

Troubled by this realization, Pressner set out to learn more about unconscious biases. She found that unconscious biases are the result of the necessary shortcuts that our brains take in order to process the millions of pieces of information around us at any given moment. No one could survive without these mental shortcuts (imagine having to consciously think through each step in a simple task such as writing your name).

Pressner discovered a method to self-check (a diagnostic!) for biases that she calls “Flip It to Test It.” Mentally flip whomever or whatever you're talking about to test yourself. If the “flipped” result feels weird, you may have uncovered a bias.

In the visual example below, Pressner flips the typical definitions of male “take-charge” traits and female “take-care” traits against pictures of each gender.

And it’s not just male/female stereotypes that are impacted; racism, sexism, ageism — all of the “-isms” — can be subject to unconscious bias. Here’s another example of the “Flip It to Test It” method in action:

Probably the most well-known researchers in the field developed tests to help identify implicit, or unconscious, biases, such as this well-known test from Project Implicit.

To Pressner’s relief, the response from her TEDx talk has helped create more awareness around unconscious biases, fueling a healthy dialogue.

“This is an amazingly powerful and inspiring speech,” wrote one viewer. “It is sometimes unusual to see leaders at a certain point in their careers being so honest and open about their biases, especially toward themselves.”

The University of Dallas recently caught up with Pressner to learn more about her research and see if the risk of publically admitting her bias has paid off:

UD: Since giving your TEDx talk, how have viewers reacted?

KP: I've been blown away by the response.

Most people would be beside themselves to imagine that they're biased and don't even know it, and in particular, biased in ways that are fundamentally inconsistent with their closely held values and beliefs.

My hope was to honestly share my own experience, because I believed that had the potential to move each of us from ‘defensive mode’ to ‘discovery mode.’

UD: Has the feedback been all positive, or have you had to do any "damage control"?

KP: So this is the interesting bit. Anyone who has spent any time at all on the internet knows there are 'haters' out there.

I knew what I was sharing was vulnerable. From a perspective of opening myself up to negative comments online, but also in terms of perhaps being the first HR executive to 'say it.'

Surprisingly, the vast majority of the feedback has been positive. At first I was scratching my head as to why. I believe it may have been the approach I took. I wasn't accusing anyone. I took people on a journey of my own experience, shared some data that corroborates what happened and offered a free, fast and pragmatic solution. One that could be tried if you're keen and discarded if you're not.

UD: Do you have any updates on your research or success stories with the "Flip It to Test It" method?

KP: It's been so cool because within my own circle of colleagues and friends around the world (and growing increasingly wider as the talk spreads), people are starting to say, ‘Should we flip it to test it?’ ‘What if we flip it to test it?’ We’re getting in the habit of ‘catching ourselves’ and returning to conscious decision making, one person and one decision at a time.

It will take some time to make movement, but again, the more of us who know, the faster we can get to that tipping point.

UD: Do you have any favorite memories from your time studying at the University of Dallas?

KP: I truly enjoyed getting my MBA from the University of Dallas and feel that it’s been pivotal to any career success I’ve been able to achieve.