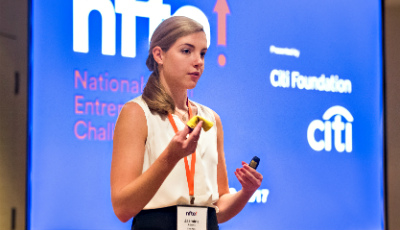 Adams was one of 41 students nationwide selected to participate in the competition and was awarded a $10,000 scholarship for her first place finish.

Smudgies, like many great inventions, was born out of ingenuity. As a former swimmer, Adams had several old swimsuits lying around. After smudging her makeup one morning while getting ready for school, she reached for the closest thing to wipe it off — a swimsuit. To her surprise, the nylon-spandex composite material easily removed her makeup mishap.

But Adams didn’t turn her discovery into a business until her senior year in high-school when she enrolled in an entrepreneurship class though the Network for Teaching Entrepreneurship (NFTE).

During this class, Adams learned how to grow her idea into a business and was also challenged to grow her network as a young entrepreneur.

“At first I was terrified about the idea of presenting my business plan and networking with other entrepreneurs, but I found out how helpful it is to make connections with people,” said Adams. “It’s still a learning process every single day, but the biggest change I’ve seen in myself is that I have more confidence to talk to people.”

When Adams arrived at UD a couple months before the national competition, she put her own advice into action and sought out mentors, like Associate Dean of Faculty Affairs Greg Bell, Ph.D., to help her prepare for the national stage.

“Dr. Bell helped me quite a bit when I first arrived at UD and he introduced me to Professor Hamilton, who let me do a practice run in his class before the competition.”

Adams' practice paid off. Her eight and a half minute presentation in front of a panel of judges garnered her a first place finish in the national competition and helped propel the Smudgies brand forward.

Adams continues to manage the growing business while a full-time student at UD. The success of the company and her commitment to her education has made teamwork invaluable for keeping the business running. 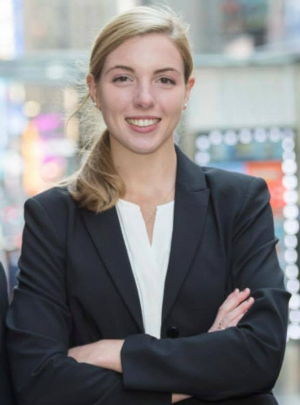 “Having a good team of people is really important. It's impossible to run a business completely on your own,” said Adams. “For example, before we were able to get into a factory, my dad was the one making the products on our old sewing machine at home! That's why networking is also so important. I am constantly amazed by how generous people can be, especially when it comes to offering advice or helping make new connections.”

To her father’s relief, Adams’ product is now being made in a factory a couple hours from UD’s campus.

“The plan now is to grow the brand. I’m selling on our website right now, but I’d love to get Smudgies into retail stores and the long term plan would be to sell the brand to a major makeup company.”

When asked what’s next for her, Adams replied, “This is never what I envisioned myself doing, but I feel like once people begin starting businesses they don’t stop.”

Are you a UD student who loves entrepreneurship or has a business idea you want to bring to life? Join the University of Dallas’ Entrepreneurship Society.