From Bombay to Banking: The Story of Chan Patel 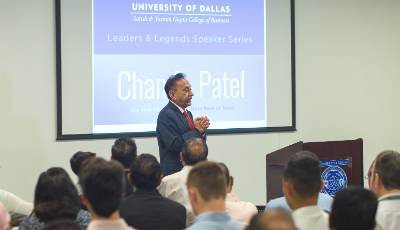 “My story begins in Bombay. I was 20 years old when I left India to attend Stanford University,” explains now chairman, CEO and president of State Bank of Texas, Chan Patel. He goes on to explain to a room of University of Dallas students and alumni that he came to the U.S. with only $600 in his possession and was determined to get his degree and return home as quickly as possible. Except life in America didn’t quite play out as he thought it would.

After graduating from Stanford at lightning-speed and later John’s Hopkins, Patel, despite his prior intentions, didn’t return home to India after graduating. Instead, he took a job with Braniff Airlines in Dallas, Texas.

The airline business was good to Patel. He made a living salary and had flying perks that allowed him to travel the world. He and his wife would frequently travel to San Francisco to meet with extended relatives ("the San Francisco Patels") who were thriving in the hotel industry. After each visit to San Francisco, Chan Patel would question his decision to stay in the airline industry. Finally, in September of 1976, he sidelined his career at the airline and purchased his first hotel in Dallas. Six years later, he was the owner of 13 hotels.

“Patels all over the country heard of my success,” said Chan Patel. Shortly after, many of his extended family members moved to Dallas to follow his path to success.

On May 7, 1985 disaster struck for Chan Patel. At the age of 38 he suffered a heart attack that changed his business practices and the course of his life. Thinking he was too young to die of a heart attack, he decided to change his lifestyle.

He stepped back from managing the day-to-day operations of his hotels — a task that regularly required 12-hour workdays — to become, in his words, “a full-time cardiologist.” Determined to learn everything he could about heart attacks, Patel read extensively on heart health and attended several medical conferences, where he was often mistaken for a doctor.

To Patel’s surprise, the hotels were successful without his daily involvement in their operations. “While I was gone, the P and L of my hotels stayed the same. I learned that with proper delegation you can maintain your profits. Life became simple again.”

With his health back in check and a renewed outlook on life, Patel turned his attention towards a new issue that was brought to his attention: The success of his business endeavors allowed him to have excellent credit and a track record of financial responsibility. However, many individuals in his community did not have the credit history that he had built for himself. Tasks like buying a car became impossible for many “Patels.” After learning that many of his fellow immigrants could not get loans because of blank credit, Chan Patel saw an opportunity.

“This was a turning point for me,” he recalls. “I realized I could help friends and also help shareholders.”

Seeing the need for a bank that could service this demographic, Chan Patel, on top of owning over a dozen hotels, set out to open a bank.

Through leveraging connections with friends in the banking industry, and becoming a self-taught expert in banks himself, Patel was able to both buy a bank and ingeniously structure the lending agreements in a way that allowed him to make loans based on what he calls a “character based lending” model. Instead of making loan decisions based solely on credit history, Patel would authorize loans based on an individual’s reputation in his or her community.

With the success of State Bank of Texas over the last several decades, Patel emphasized to students and graduates some of the lessons he’s learned during his career: value your education, earn the trust of your peers, delegate authority and balance life with community involvement.

Take the first step towards your new career by exploring the MBA program at the University of Dallas.