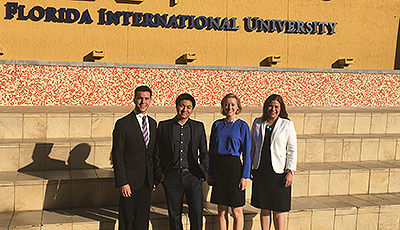 Each year the GBSC hosts a select group of students from national and international universities to undergo three rounds of intense competition with the goal of preparing them to excel in diverse business environments. The three rounds of competition include simulated role-play scenarios in which students are judged on their professional selling ability.

Professional selling, which goes much deeper than just selling a pre-existing product, requires interpersonal communication and extensive background research such as knowing who the client will be; preparing a line of questions to uncover needs, problems and goals; and creating a solution for the client that will help further the business’ value proposition.

To prepare for the competition, students had to become experts in the service they were selling and understand the benefits their service provided for business owners. UD’s team also designed their own sales materials for the event, which helped them stand out at the national competition. The second key to preparation was to role-play.

“We practiced extensively both on the phone and face to face to emulate the competition,” said Munoz.

Under Munoz’s leadership, a network of individuals stepped up to help the UD team prepare for this competition, including a former GBSC competitor, Nohely Torres, BA ’16, and Sergio Robledo, a Gupta College of Business DBA student with over 25 years of experience in professional selling.

The team’s preparation paid off. Rachel Sullivan took home gold in her group, and the University of Dallas was the only school to advance through each round of competition without a single team member being eliminated.

“In the Gupta College of Business, we emphasize experiential learning,” said Munoz. “Participating and competing in competitions like the GBSC that truly emulate real-world conditions are an essential element of the student experience.”