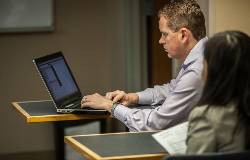 The oil and gas business isn’t just about the stuff that runs our cars and heats our homes. There are countless processes and components involved with the extraction of the products so vital to our everyday lives. Some of the more esoteric of these components are proppants, and Jesse Orsini built a multi-million-dollar business on this highly specialized product.

Speaking to Dr. Laura Munoz’s Global Entrepreneurship class, Orsini detailed the history of his former company, Carborundum. The company, which was initially a producer of ceramic material used for grinding operations, was approached in the late 1970s by a petroleum engineer who was looking for a more efficient medium to use in place of sand in the hydraulic fracking process. In the 1950s, oil and gas producers developed a technique by which they would drill into an oil and/or gas deposit, fracture the rock, then use a “medium” to further split and then hold the fracture open so that the oil and gas could be extracted. These “media” are called proppants. As technology improved and wells could be drilled deeper and deeper, sand was no longer effective as a proppant because it was crushed under the high pressures of the very deep wells.

Orsini and Carborundum were approached in hopes that they could create a ceramic proppant that could work effectively at these high pressures. Although the Carborundum name was unknown in oil and gas circles, Orsini recognized the opportunity in this highly specialized market, especially given the market climate in the 1980s. High energy prices at the time meant that oil and gas companies had money to spend, and based on Carborundum’s tests of their product, they knew that the ceramic proppant would deliver the efficiency they were promising. Carborundum built a plant in New Iberia, Louisiana, and began producing ceramic proppants.

The product sold very well, despite its premium pricing, because Orsini and his colleagues were able to demonstrate to oil and gas producers that ceramic proppants would ultimately produce greater oil and gas recovery than sand. Carborundum then began to identify areas for growth and eventually bought out another company that had developed an even better product and a more efficient processing method, both of which were covered under patents. At this point, Orsini recognized that, in order to really make a dent in the proppant market, they would have to develop an aggressive marketing campaign that could convince oil and gas service companies that Carborundum’s ceramic proppant would pay dividends in the future.

Steve Cobb, a petroleum engineer, proposed a marketing plan based on Carbordundum’s confidence in the product. They developed methods of demonstrating the effectiveness of ceramic proppants using the actual materials used in the fracking process. They also developed software programs that could simulate the specific conditions of individual wells. This allowed Carborundum to demonstrate the monetary benefits of their product to their customers. “We couldn’t just sell on the science behind the product,” Orsini said. “We had to show our customers the actual monetary benefits.”

Over the years, as the market for ceramic proppants grew, Carborundum was acquired by several companies, and as the 17-year patent coverage for the product and manufacturing process drew to a close, Orsini recognized that the time was right to retire from the business. Since his retirement, the oil and gas markets have destabilized considerably. And because of low oil prices, most oil and gas producers have had to cut costs in any way necessary, which, in turn has meant a return to the cheaper option of sand as a proppant for hydraulic fracturing. “I still believe that there is a long term benefit to ceramic proppants,” Orsini said. “But it’s hard to argue with a company that can barely keep their doors open. Sand is cheaper in the short run.” Orsini said the future of companies like Carborundum lies in the recovery of oil markets and in finding new industrial applications for the ceramic beads that make up proppants. And although we can’t always predict the future of markets, we can be sure that the creative engineers and savvy entrepreneurs, like those in University of Dallas classrooms right now, will continue to develop and market products that we never even knew we needed.