New Building Is the State-of-the-Art Centerpiece of UD’s Business School and a ‘Beacon’ for Students, Faculty, Community

The University of Dallas announced today the opening of SB Hall, the new state-of-the-art home of the Satish & Yasmin Gupta College of Business. 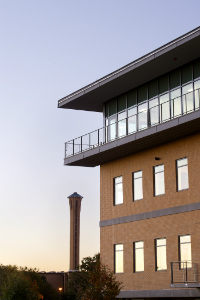 “I’d like to thank Satish and Yasmin Gupta for their remarkable generosity and commitment to the University of Dallas,” said UD President Thomas W. Keefe. “The opening of this very special building starts an important new chapter in our university’s history.”

The building features classrooms on all three levels, a full production studio, a financial markets lab, and dozens of study nooks, alcoves, lounges and student gathering places. In addition to conference rooms for student groups, the building features a modern executive boardroom.