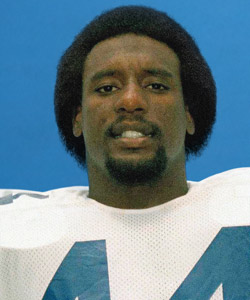 “His heart really was as big as the state of Texas. He’s one of the few people in this world who would do for you before he would do for himself.”

Robert Newhouse was a devoted family man, an athlete, a professional and an advocate of the power of education. His professional life included 29 years with the Dallas Cowboys football organization – first, from 1972 to ’83, as a fullback on three Super Bowl championship teams and later in various other capacities. He was also a successful United States bankruptcy trustee for 26 years.

Arguably the most accomplished fullback in Dallas Cowboys franchise history, he played 187 games including the playoffs over his 12 seasons (1972-’83), and his 4,784 rushing yards are fifth most in franchise history. Newhouse won four Super Bowl rings with the Cowboys, one as a player in Super Bowl XII and then three more as an employee in the 1990s. Newhouse is engraved in the history of the NFL as the first running back to throw a touchdown in a Super Bowl.

He devoted much of his time to charitable causes that forwarded child advocacy and community development. Throughout his life he valued achievement, education, his family and his fellow man.