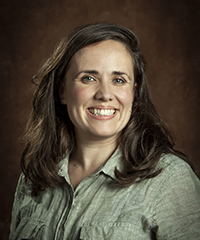 Christina Hayes Haley is an artist, curator, and theatre designer. Prior to her work at The University of Dallas, Christina curated independently as well as a number of curatorial projects at Arts Projects Australia, a studio, and gallery supporting artists with developmental disabilities in Melbourne, Australia. These exhibitions included three large group shows and two solo presentation of works by Steven Ajzenberg and Steven Perrette.

Christina Haley's paintings reflect her work as a theatre designer and her ongoing collaborative practice with The Sisters Hayes. Family drama and shared histories relating to place and identity weave their way into Christina's large-scale paintings that involve storytelling, play-acting, theatrical tableaux's and dress-ups. Recent work explores an imaginative personal history of the Wild West and the American Frontier. Born as a fifth generation Montanan but raised in Melbourne, Australia by her American father and Filipino mother has led to travels both imaginary and real to explore her diverse heritage and familial stories. Christina has held four solo exhibitions has also exhibited in group, collaborative and two person shows nationally and internationally.
Christina completed a Master of Fine Arts from the Victorian College of the Arts in 2015 and also received her Bachelor of Fine Arts there in 2004. Christina has received a number of awards and scholarships including the Eleanor and Joseph Wertheim Scholarship, Outstanding Creative Government Scholarship, Arts Project Development Grant, Arts Victoria (joint recipient with The Sisters Hayes), City of Melbourne Young Artist Grant and the NAVA Visual and Craft Artists’ Grant for Presentation and Promotion of Art (joint recipient).
Christina also designs set and costume for theatre. As one-third of The Sisters Hayes, a collaborative sibling trio, Christina has co-designed costumes and sets for the Malthouse Production’s of Antigone (2015), Walking into the Bigness (2014), and Blood Wedding (2012). The Sisters have held solo exhibitions for their collaborative works, including Big Sky Country and A Good Death was a keynote project in the Next Wave Festival. The trio has been included in a number of group exhibitions in commercial, gallery and artist run spaces. Their work has been featured in Collaborative Art in the Twenty-First Century published by Routledge Press.