Kristin Van Cleve was recently appointed chairperson of the music department at the University of Dallas, where she has directed the chamber ensemble program since 2007. She is Artistic Director and Principal Violinist of the historical performance ensemble, Texas Camerata and is Principal Second Violin with the Dallas Opera Orchestra.

Ms. Van Cleve began violin studies in her hometown of Fairbanks, Alaska and later moved to Texas, receiving both Bachelor and Master of Music degrees in Violin Performance from the University of North Texas.   As a baroque violinist, she has performed in Boston, Washington, D.C., France, Mexico and throughout the southwest. Ms. Van Cleve is concertmaster of several other historical instrument ensembles, including the Orchestra of New Spain, and has performed with Apollo's Fire, the Cleveland Baroque Orchestra.  As a modern violinist, she is a member of the New Hampshire Music Festival, has returned to Alaska as a faculty member of the Fairbanks Summer Arts Festival and in June 2011 traveled to Bolivia to teach and perform.

Ms. Van Cleve is active as a clinician for violin students of all ages and also maintains a private teaching studio in Dallas. She performs with the Fort Worth Symphony and traveled with that orchestra to Carnegie Hall in 2008.

Andrey Ponochevny graduated from Belarussian Academy of Music where he received his bachelor and master degrees. He also earned his Artist Diploma from TCU in Fort Worth, where he studied with Dr. Tams Ungar. He continued to refine his skills in the Artist Certificate Program at SMU in Dallas with renowned pianist, Juaquin Achucarro. He has appeared with the Baltimore Symphony Orchestra, Des Moines Symphony, Rogue Valley Symphony and the Illinois Symphony, Irving Symphony, Orchester der Ludwigsburger Schlossfestspiele and Belarusian State Symphony among others.

He also holds several prestigious awards from China such as Outstanding Artist in China 2009 and 2011, Honorable professor of Jilin College of Arts and visiting professor at the Beihua University. In his hometown Minsk (Belarus) he was awarded the title "Minskovite of the year 2002".

Ms. Cunningham graduated from Texas Woman's University with a Bachelor's Degree in Music Education/Piano Performance. After teaching in the classroom for four years as a general music teacher of K-8, she decided to go completely private about 14 years ago and has a studio of 50 private piano students here in Irving. She was born and raised with her two older brothers on a 300-acre farm in Jasper, Indiana, by two very hardworking Catholic parents. Ms. Cunningham and her husband are the proud parents of two young children and very much enjoy living in Texas although they try to get back to Indiana as much as possible.

Besides teaching privately and working as the music teacher at Mount St. Michael's Catholic School in Dallas, Ms. Cunningham enjoys her church job at St. John the Apostle Catholic Church in North Richland Hills where she is the main pianist/organist and plays for four masses on Sundays.

Ms. Cunningham holds a bachelor's degree from Texas Woman's University in Music Education/Piano.
She is the author of "The Five Fathers of Music" and "NoteSpeed."  She is a piano instructor at the
University of Dallas in Irving, TX and specializes in teaching beginning through advanced students.  She has maintained a full studio of piano students since 1998.

Sharon Gross holds a Bachelor of Music Education Degree from the University of North Texas with a certification in Choral Music Education and also has a Master of Vocal Performance Degree from University of North Texas, with an emphasis in opera and choral music. She was a vocal student of Dr. Stephen Farish and Mr. Harold Heiberg. During her musical studies at UNT. Ms. Gross was a member of the UNT Madrigal Singers conducted by Dr. Robert Ottman and the UNT A cappella Choir, conducted by Mr. Frank McKinley. She performed with the UNT Choir at the Kennedy Center in Washington D. C., and also toured with the choir, during her graduate studies, to Poland, England, Holland, France, and Belgium. She also studied voice in New York with Mr. Bill Schuman and sang professionally with the Ridgewood Singers touring Paris, Monte Carlo, Germany, and England performing with the Jazz Ensemble “Vocal Point.” She has performed and directed operas and musicals throughout her career. Ms. Gross performed with the Dallas Opera Chorus, Fort Worth Opera Chorus and also performed with Fort Worth Opera in the artist program.   Ms. Gross sang with Robert Shaw Chorale in New York at Carnegie Hall during performances of Beethoven’s Missa Solemnis. Sharon Gross was a member of the Dallas Symphony Chorus under the direction of Mr. Joshua Habermann during 2013-2016.   During June of 2014, Ms. Gross toured Spain and France (Provence) with the Dallas Symphony Chorus as they performed the Mozart Requiem.

Ms. Gross taught applied voice and directed voice students in select operatic productions at The Hockaday School in Dallas, Texas.  The voice students were involved in performing musicals within the school community and also performed the following opera presentations: La Voix Humaine, Suor Angelica, Hansel and Gretel and The Telephone. Voice students also competed in National Association of Teachers’ of Singing contests and TPSMEA (Texas Private School Music Educators’ Association) contests and events. Ms. Gross also taught as an Adjunct Vocal Instructor at Dallas Baptist University and continued to maintain a private voice studio throughout her career. As a choral music educator and voice teacher, Ms. Gross was on staff at R. L. Paschal High School in Fort Worth and also Fort Worth Country Day College Preparatory School in Fort Worth. During 2005-2014, Ms. Gross served as the Chairman of the Performing Arts Department at Irving High School.   She was the Director of Choirs and coached students in individual voice instruction.  The A cappella Choir performed in the American Music Festival at the Meyerson Symphony Concert Hall, and the  Vocal Jazz Ensemble performed for many venues throughout the DFW area. Many of her students performed and advanced to the state level of UIL Solo/Ensemble competition. During her tenure at Irving High School, Ms. Gross conducted the vocalists, chorus, and orchestra during the Performing Arts musical theater productions, and also served as the producer of the productions. Also, during her tenure within the Irving ISD, Ms. Gross was awarded the honor of Irving High School Campus Teacher of the Year and was also selected as an Irving ISD District Secondary Teacher of the Year.  Sharon Gross is currently in her second year at The University of Dallas as an Adjunct Professor of Voice Practicum (private vocal study) Advanced Voice, and Lyric Theater in The Music Department.

As a soprano soloist, Ms. Gross has performed in Mozart’s Requiem, Handel’s Messiah, and Mendelssohn’s Elijah. In addition, she has performed as a choral member and soloist for various church and sacred music venues. Some of her operatic roles include ‘Suzanna’ and ‘Barbarina’ in The Marriage of Figaro and the role of the ‘Mother’ in Hansel and Gretel .  Her musical theater roles include ‘Marion’ in The Music Man, ‘Martha Jefferson’ in 1776, ‘Laurey’ in Oklahoma, ‘Jenny’ in Shenandoah, and ‘Faye Templeton’ in George M. 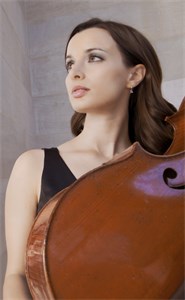 Originally from Rimouski, Québec, Canada, Dr. Oliver holds a Master of Music degree and a Doctor of Musical Arts degree from the Cleveland Institute of Music, where she studied with Desmond Hoebig, former Principal Cello of the Cleveland Orchestra, and Richard Aaron. Dr. Oliver also holds an Undergraduate degree from the Conservatoire de Musique de Montréal, where she studied with Denis Brott. From 2002 to 2010, she was Principal Cello of the Akron Symphony and the Canton Symphony in Ohio. Dr. Oliver was heard in many summer festivals, including the Tanglewood Music Institute, the Music Academy of the West, and was invited to participate in the Gregor Piatigorsky Seminar for cellists. Dr. Oliver is now an Adjunct Faculty member of the University of Dallas, where she teaches cello, and a freelancer and sought after chamber musician in the Dallas-Fort Worth area.