Aaron Mebane demonstrates the 3_D printer on the Mall during Science Week.

Physics majors give presentations at the Texas APS and DNP Meetings, October 2015

Originally, the term “music” had a broader meaning than it does today and referred to “any human art over which the nine Muses presided” (Lehner: New Catholic Encyclopedia). Over time it acquired a more narrow meaning, signifying the artful arrangement of sounds into melodic, harmonic, and rhythmic patterns and structures and even compositional wholes. This year's cohort of philosophy seniors learned to dwell with music philosophically by acquainting themselves with some of the basic categories, vocabularies, and subject matters associated with the study of the philosophy of music. For example, they studied the Greek view of music as imitation (mimesis), which was first set forth by Plato and then taken up by Aristotle, the Neoplatonists, and Augustine. They also studied music as idea, which is reflective of the modern period and is associated with the views of Kant, Schiller, and Hegel. In addition, they examined contemporary philosophical reflections on music as experienced or the phenomenology of music (Gadamer) and music as a social and political force (Adorno). Complete schedule here.

We invite you to join us on Saturday, March, 25, in SB Hall’s Serafy Room (9:30 am-4 pm) for a day devoted to extended dialogue on the philosophy of music. Please come to celebrate and support our seniors as they present the fruit of their labors at the Sixth Annual Philosophy Senior Conference! You won't be disappointed. 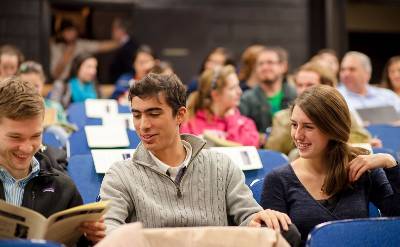 How does a philosophy degree pay off?

Click to see how Bridget's philosphy degree took her to D.C.