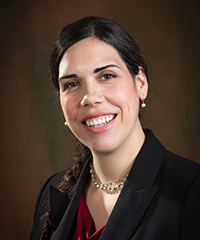 Catherine Nolan is currently working on issues in the intersection of metaphysics and bioethics.  She is particularly interested in applying the concepts and arguments of the Christian metaphysical tradition to contemporary problems.  Her dissertation, entitled “The Ethics and Metaphysics of Vital Organ Donation,” was a defense of the claim that death is a metaphysical event, unable to be determined purely scientifically.  This makes the diagnosis of death much more uncertain.  If we attempt to justify vital organ donation by claiming that the donor is dead, we are often being misleading or dishonest.  Instead, she suggests that we should focus on not killing the donor, treating those who may be dead as though they are still alive.

Catherine Nolan, "Augustine and the Pursuit of Knowledge during a Crisis," Biblioteca della Libertà, vol. 55, no. 228, May-August 2020.