Thank you to all those who made the 2011 Aquinas Lecture events with Robert P. George a huge success! Our thanks especially goes to Professor George, whose generosity in coming to UD provided the opportunity to share in his knowledge and expertise as a Catholic academic, scholar, and nationally renown political influence. Please click here for a transcript of an interview done with Professor George. 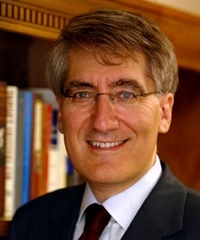 The UD Philosophy Department is pleased to announce the 29th annual Aquinas Lecture. This years Aquinas Medalist is Robert P. George. He is McCormick Professor of Jurisprudence and Director of the James Madison Program in American Ideals and Institutions at Princeton University. Professor George is also a Professor of Politics and an associated faculty member of the Department of Philosophy at Princeton University.

Professor Georges specializations include constitutional law, philosophy of law, and political philosophy. He has served on the Presidents Council on Bioethics and as a presidential appointee to the United States Commission on Civil Rights. Professor George has also served on UNESCOs World Commission on the Ethics of Scientific Knowledge and Technology, of which he remains a corresponding member. As a Judicial Fellow at the Supreme Court of the United States, Professor George received the Justice Tom C. Clark Award. Publications include In Defense of Natural Law; Making Men Moral: Civil Liberties and Public Morality; and The Clash of Orthodoxies: Law, Religion, and Morality in Crisis.

For the Aquinas Lecture, Professor George will speak on Natural Law, God, and Human Dignity. The lecture offers an account of the nature of practical reasoning and the identification of norms of morality, considered as principles entailed by the integral directiveness of the range of human goods to which the first principles of practical reason (and most basic precepts of natural law) direct human action. It offers a proposal regarding the basis of human dignity and explores the question of the relationship of ethical to theological reflection.

Professor George will also give a seminar, where he will discuss John Rawls and Jrgen Habermas views on public reason. Please click on the word, "seminar," in the previous sentence for the text that will be used in this discussion.

These events are free and open to the public. For more information, please contact the UD Philosophy Department by phone at 972-721-5161 or by email at phildept@udallas.edu.