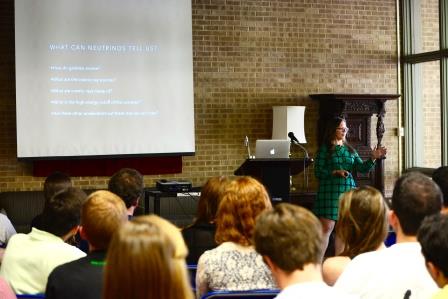 “Get your hands dirty.” That’s the advice Dr. Stephanie Wissel, Assistant Professor of Physics at the California Polytechnic State University (Cal Poly) in San Luis Obispo and a University of Dallas alumna, gave to students during her recent visit to UD. Wissel and her husband, Dr. Nathan Keim, were here as part of the Clare Boothe Luce Speaker Series, sponsored by the Physics Department.

“You have to try out what interests you,” Wissel continued. “If you don’t like it, try something else. Find someone who does research in an area you’re interested in and try to work with them. It’s a lot better than doing a Google search.” Wissel’s remarks came during a breakfast in which she and Keim answered students’ questions about everything from working for NASA to getting into graduate school.

While a student at UD, Dr. Wissel was a Clare Boothe Luce Scholar.  Immediately after graduating, she attended the University of Chicago where she received a Ph.D. in astroparticle physics.  From Chicago she went to Princeton University where she had a postdoctoral appointment  at the Princeton University Plasma Lab; there she conducted plasma physics and teaching innovation research.  After leaving Princeton she completed a second postdoctoral appointment at UCLA, where she worked on the ANITA project to detect neutrinos at the Southpole.