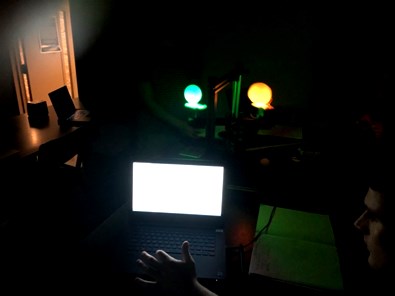 Students in UD physics courses experienced some of the innovative experiments and demonstrations as part of the department’s emphasis on experiential learning. Clockwise: Demonstrating Einstein’s description of the gravitational effect of curved space, testing the acceleration of gravity in general physics labs and eclipsing binaries lab for astronomy.

Left:  Students in Dr. Olenick’s Mayterm Astronomy in the Smoky Mountains course had fun at Water Rock Knob during a break in class. 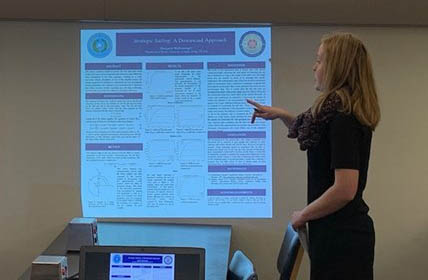 Physics major Meg McDonough presented her Computational Physics project on Strategic Sailing: A Downwind Approach in an ePoster session for the course. Meg is an avid sailor and her brother, Peter McDonough, Ph.D., is a graduate of UD’s Physics Department. 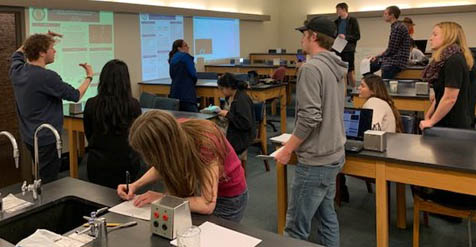 Physics majors David Foust and Luisa Velasco presented their ePosters for Computational Physics while other students listened in. David discussed the use of Monte Carlo methods for simulating protein folding in proteogenesis and Luisa explained synchronization of random walkers in 1-, 2-, and 3-dimensions, and the connection to tree parity machines. 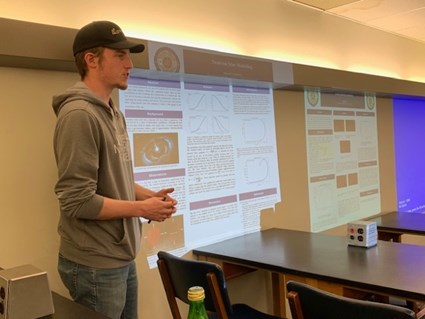 Computer Science major Michael Andalaro talked about his Computational Physics project on neutron star structure in which he applied the Bethe and Johnson equation of state to the Tolman-Oppenheimer-Volkoff equations.

Optics projects and labs were completed and developed by students while at home during remote learning this Spring 2020 semester. Students each completed their own hologram using kits purchased by the Physics department. Students could use the provided laser to make their own optics experiment to show their proficiency in designing, building and performing their own optics lab project at home, independently. Holograms were made using kits created by Litiholo, containing a die cast Mini-Cooper, a stack of dice, and a Lego mini-figure.

Fresnal diffraction by square and circular apertures, construction and testing of Pohl Interferometer, thin film interference with bubbles, low cost pulse sensor, and Lissajous curves with lasers and sound waves at various frequencies. Be on the lookout for a University News article coming soon, with more details about Optics Lab Student Projects.

Joe Dougherty, fellow seminarians and family built a trebuchet as a gift for the physics department. Pictured here, Joe explains how to fire the trebuchet by pulling the pin and how to load the simple machine. The trebuchet will be used in outreach events and course enhancements, such as theoretical mechanics. 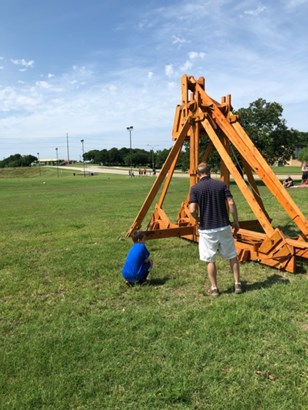 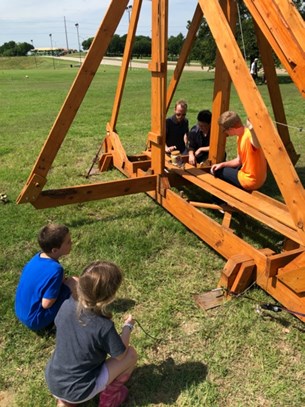