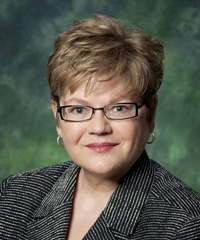 The most recent financial crisis, generally viewed as being precipitated by the early 2000s spate of sub-prime mortgages and their securitization, led to the failure of 507 banks between 2008 and 2014. The year 2008 saw the first wave of 25 bank failures and by the middle of 2009, another 45 banks had closed. This prompted us to develop a model to predict future bank failures from mid-2009. Bank failures in this period can be predicted based on traditional bank financial strength proxies as well as identification of key loan portfolio components. Our findings indicate that financial ratios and loan portfolio structure are key determinants of bank financial health; and when predicting potential failure over a reasonable time period, such as up to 18 months, models can be highly predictive. The high degree of correct categorization combined with simple nature of the model and the use of readily available data allows for wide-spread usage among practitioners as well as academics.