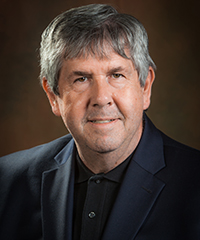 Livonia Michigan (near Detroit). I got a BBA (accounting), MBA (taxation) and MS/PhD (economics) all at the University of Notre Dame and I am CPA. I can say I spent 7 ½ years there – but it was over a period of 13 years. They were very generous – undergrad was mostly through work study/loans/scholarships – grad school was scholarships and letting me teach accounting classes.

How did you end up at UD?

I got married and my wife was from Dallas – I had been a student and worked at Catholic universities in the past, so I thought I would enjoy the place – and I have – for 15 years now.

What was your experience like as a first-gen student?

I was an only child and it was difficult finding information about college. My parents both dropped out of high school around 11th grade and neither parent had siblings who went to college either. No one in my neighborhood seemed to be a college grad either.

I remember in 8th grade I asked a teacher in junior high how much it cost to go to college since no one in my family knew. She walked me into the school library and pulled out Peterson’s Guide. I remember studying that for hours over the next few months.

I ended up going to an all-boys Catholic high school in Detroit. I could work in the school all summer painting rooms and waxing floors, and that would pay for my tuition for the year. That was very helpful since most of the boys in the school would be going to college (as opposed to the public high school I would have gone to). As I moved into taking Advanced Placement courses in junior and senior years, the teachers encouraged the students to think about more prestigious universities to attend.

What were some challenges you had as a first-gen college student?

Not having any spending money really.

Back in the 1980s you could pay for much of tuition cost at a private university making minimum wage of $3 per hour (believe it or not) and taking out some loans with scholarships. Tuition at Notre Dame was around $5000 per year, room and board around $2000. You could work all summer – around 500 hours – and make $1500. You could do work study (15 hours per week) during the school year and make another $1500. Today, the minimum wage is $8 an hour in Indiana and ND cost around $70,000. You cannot work that! You are dependent today on scholarships – although I am sure that budgets are still tight today for college students from the lower or lower middle income just to supplement it.

For me, having to work that much meant a) you were not going any place on vacation during the summers b) you couldn’t afford to go with friends to spring break in Florida or Texas and c) you weren’t going to study abroad because that would cost more and you couldn’t do work study for the semester or year you were gone – and you needed that money.

You look forward to the future as much as you can and stay focused. Have fun within the boundaries that you have.

My roommates at ND, for the most part, had fathers who had incredible jobs. One was the mayor of Cincinnati – another owned car dealerships in Chicago. One parent was a partner in a large accounting firm and for fall break, my roommate and his dad went to Scotland and played golf at St Andrews (I undoubtedly took the train home to Detroit). Eventually, years later, I did make it to Scotland and England.

If you had to give one piece of advice to current first-gen students what would that be?

Find a major that you like and can make enough money to keep you happy.

That might not be the major you “love.” It is a balancing act.

My parents were blue collar laborers – my mother worked as a cashier and my dad would build aluminum awnings on an assembly line. They were on their feet eight hours a day and really disliked their jobs. So find something you like.

But it is a balancing act. I teach graduate courses in accounting at UD. Each semester, probably ¼ to ½ of the students in the class majored as an undergrad in something besides business or accounting. Many found out they could not get a job in their field that paid them enough to enjoy the lifestyle they wanted to have. So they migrated over to accounting – many times teaching themselves the basics and working in it before beginning a formal program at UD.

In the summer of 1982, before my sophomore year, I had to decide on what to major in. It was in the middle of the worst recession in decades. In Detroit, Chrysler was going bankrupt and Ford was close to it. I knew I was going to change my major from pre-med (the MD was not for me), but what?

I loved history – I took two AP courses in history in high school and enjoyed every moment.

But guess what? In addition to all that working and some ND scholarships, I still had to take out loans. As my parents pointed out, I needed a job when I graduated, and at that moment, it was a very bad economy in Detroit. So I chose accounting. I liked numbers – didn’t love it – but liked it – and you could always get a job in accounting. Forty years later, I can still say that and I can still see some students taking that option even in grad school.

What advice or info would you say to those who are not themselves first-gen but have friends who are first-gen?

I don’t think the non-first gen students necessarily noticed a first-gen student – or if they did, they were “quiet” about it. We all lived in dorms, wearing basically the same clothes, although some of them might have very nice cars. If I were to give advice, I would simply say “don’t point it out” – although sometimes it can’t be avoided.

When I was an undergrad at ND, I got both the Pell grant (it was then called the Basic Educational Opportunity Grant - BEOG) and the SEOG (Supplemental Educational Opportunity Grant). The SEOG was for even lower income households than the BEOG. Once I saw in the Wall Street Journal a listing of schools and the percent of SEOG recipients at each school. At Notre Dame it was 2%. I think that number is so low, the other students didn’t even notice who might be in that income category.