Hear what our partners in Tyler, TX have to say about our Diaconate Program. 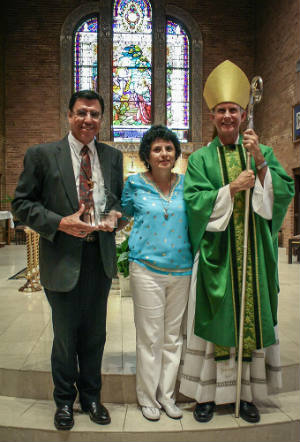 TYLER – Deacon Rubén Natera was presented the University of Dallas Neuhoff School of Ministry’s Lumen Gentium Award July 3, 2016 during Mass in the Cathedral of the Immaculate Conception.

The award is given annually by UD to a graduate of the university’s Neuhoff School of Ministry whose established record of outstanding accomplishment reflects the fruit of “theological education for transformative service.” The award honors graduates who have given exemplary service to the local church in general, the work of faith formation in particular, and the larger community, especially the poor and needy.

Presenting the award was Dr. Marti Jewell of the school’s graduate faculty.

Dr. Jewell said Deacon Natera “has been an exemplary pastoral minister for many decades, serving in a wide range of capacities in many parishes in the Diocese of Tyler.”

Ordained a permanent deacon in 2001, he served as co-director for Hispanic ministries under Bishop Álvaro Corrada, SJ, and was vice-chancellor and chancellor for Bishop Corrada and Bishop Joseph E. Strickland, between 2002 and 2012. He has been actively involved in leadership with deacon formation, as well as Hispanic, music, prison, and other ministries in the diocese. He also was involved in the Diocese of Tyler’s “twinning” program with the Diocese of San Pedro Sula, Honduras. He is an adjunct instructor for the UD School of Ministry.

“Deacon Natera is well known throughout the state of Texas and beyond for his effective, generous, and skilled ministry,” said Dr. Jewell. “He is beloved by people who know him for his gentleness of spirit, keenness of mind, and for his open-hearted sense of humor. It is my privilege to call him friend.”

In accepting the award, Deacon Natera thanked in particular his wife Maria Guadalupe, who has worked with him in many of his ministries.

“This is indeed a great honor,” he said. “I have to thank my wife, because we don’t do these things alone. If you’re a married person, you don’t do anything alone.”

The Nateras have six children, one of whom is deceased, and 16 grandchildren.

Re-published with permission from The Diocese of Tyler. Special thanks to Susan De Matteo & Sue Necessary.