Transforming a Community 7,000 Miles Away 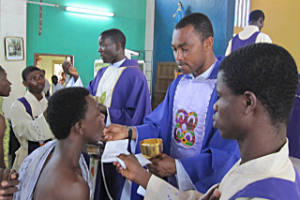 A few days before graduation, Rev. Charles Addai-Kankam, MTS ‘14, was looking forward to finally meeting some of the professors who taught him during his three years studying at the Neuhoff Institute.

A priest in the Catholic Diocese of Kumasi, a city of more than two million people in the West African country of Ghana, Addai-Kankam completed his coursework for the master’s of theological studies online, 7,000 miles and five time zones away from UD.

Currently, Addai-Kankam serves as campus chaplain for his alma mater, the Opoku Ware School, a Catholic boarding school for senior high-aged boys in Kumasi. He and one other priest are responsible for the pastoral needs of the school’s 2,400 students. He also teaches religious and moral studies classes.

Addai-Kankam, who was born and raised in Kumasi, spent three years as an assistant parish priest at St. Vincent de Paul Church in Arlington, Texas, where he learned about UD’s Neuhoff Institute.

He returned to Ghana in February 2012 with two years of coursework left. He worked on his courses in the evening after spending all day at the school - a schedule recognizable to many UD alumni.

“Even as a priest, I confess that I didn’t know that much about church history before my ordination,” said Addai-Kankam.

Addai-Kankam spoke about the differences he observed serving as a priest in such disparate location such as North Texas and West Africa.

“Ministry in Africa is tough when it comes to materials: for example, books and computers. It’s easier to read and learn more quickly in the United States than it is in Africa,” he said.

Despite the difficulty with resources, the Catholic community in Ghana is flourishing, according to Addai-Kankam, with 19 dioceses in the Texas-sized country (Texas has 15).