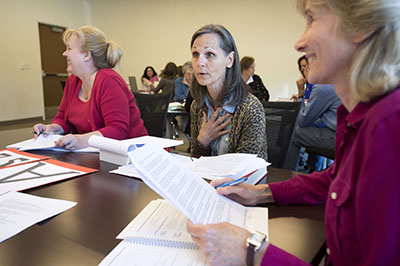 Its publication was a decade in the making, but in August 2016, the Spanish version of the Ann and Joe O. Neuhoff Institute for Ministry & Evangelization Catholic Biblical School (CBS) program’s Year One student workbook will be available from Paulist Press.

UD’s own Neuhoff Institute for Ministry & Evangelization Director of Continuing Education Programs and Affiliate Instructor Pía Septien, MTS ’04, began translating the Year One workbook shortly after she was hired in 2006 along with Affiliate Instructor Juan Rendon, BA ’00; a provisional version of the workbook has been in use by the CBS ever since, printed and bound at UD on an as-needed basis. Septien and the school of ministry’s dean at the time, Brian Schmisek, approached Paulist, the publisher of the English version of the workbook, prior to beginning the translation to see if they were interested in publishing the Spanish version as well. However, Paulist didn’t believe there would be a market for it, though they did give the go-ahead to proceed with translating and try to find a different publisher.

“They said that if we could prove there was a market, they would reconsider,” Septien said. “Well, we proved it.”

Septien and Rendon went on to translate the other three workbooks as well. These translations were not easy, as they required in-depth knowledge not only of the two languages involved but also of the Bible; a translator who was not also profoundly familiar with the Bible and all of its terms would likely have used the incorrect Spanish word for some of the English ones: for example, the title of the Year One course, “Old Testament Foundations,” might have been translated as “Fundamentos del Viejo Testamento” rather than “Fundamentos del Antiguo Testamento.”

Moreover, the translations had to be done during the summers prior to each year of the program while also planning and preparing for the teaching of the course.

The original English versions of the workbooks were written by Schmisek, Professor of Sacred Scripture Gene Guiliano and two former instructors in the ministry school -- Judith A. Hubert, who retired seven years ago, and Dorothy Jonaitis, who now teaches elsewhere. There is a workbook for each year of the four-year CBS program, an intensive continuing education and faith formation course that covers the entire Bible and is designed especially for deacons, religious education teachers, lectors and leaders of Bible study groups.

Septien also pursued getting the Spanish versions of the workbooks published through Liguori Publications, the publisher of other books used by the CBS, but they had no luck there, either, although Liguori did request another sequence of books from Septien and Rendon, the “Biblical Study Series,” that was then published.

Finally, after 10 years, Paulist reviewed the evidence at hand: the number of Spanish-speaking students who have gone through the CBS program and benefited from the translated workbooks.

“As an alumna of the Catholic Biblical School at the University of Dallas, I'm sure this workbook will be very useful not only for students, but for those who are thinking of leading a Bible study in their parishes; they will have a great resource at hand,” said Cecilia Rangel, CBS ’10.

“The Catholic Biblical School is an invitation to learn not only the story of salvation, but also how the same story relates to yourself and to the whole world,” said Sonia Dimas, CBS ’10, Hispanic ministry coordinator at Mary Immaculate Catholic Church in Farmers Branch, Texas. “This school has opened up my eyes to the Scriptures and given me an ability to see myself in any Scripture passage I read. I’m so happy that this wonderful work will finally be published.”

Now that Paulist is publishing the Spanish version of the Year One workbook, other schools can benefit from it as well. The workbook will be available in bookstores across the country, as well as on Amazon. In subsequent years, the workbooks for Years Two through Four will also be published.