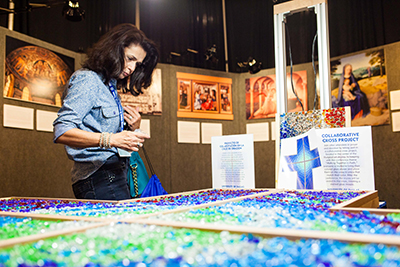 Naming the ministry school in the Neuhoffs’ honor will perpetuate their legacy of faith and service, marking a new chapter for the school and enriching its mission of providing theological education for transformative service for the university community, Dallas/Fort Worth area and diocesan partners nationwide.

“Over the years, the Neuhoff family has generously contributed their time, talents and financial support to the University of Dallas and to the church in North Texas. We are grateful for their generosity and inspired by their example,” said Ted Whapham, dean of the Neuhoff School of Ministry.

A lifelong Catholic who attended Mass daily, Joe O. Neuhoff was compelled by the mission of Bishop Thomas Kiely Gorman, bishop of the Diocese of Dallas from 1954-69, to foster Catholic education. Neuhoff sought to establish a Catholic university to meet the faith-formation needs of North Texas.

“Dad’s involvement with the university can best be summarized in a quote from his long-time pastor and confessor, Monsignor W. J. Bender: ‘Christian to the core, Catholic to the hilt, no task asked of him by his church was too much,’” said son Joe Oscar Neuhoff Jr.

Ann Neuhoff, too, was dedicated to the university community and left a lasting legacy through a gift that helped build the Church of the Incarnation, the university’s on-campus church and a central part of its vibrant spiritual life.

The renaming of the School of Ministry honors not only Ann and Joe O. Neuhoff, but also their  son, Joe Oscar, who has continued in his parents’ footsteps. He has served on the university’s Board of Trustees since shortly after his father retired in 1971 and has been a steadfast advocate for the School of Ministry as it has grown.

“The University of Dallas is grateful for these years of service from the Neuhoffs,” said University of Dallas President Thomas W. Keefe. “Their faith and hard work have empowered our ministry school to reach more students with the education vital to the growth and well-being of our Catholic communities in this diocese and across the nation.”

Originally the Institute of Religious and Pastoral Studies, the first incarnation of the Neuhoff School of Ministry was established in 1986 as an embodiment of Bishop Gorman’s mission of higher education for the laity in serving the growing Catholic community across the diocese; it became a full-fledged school in 2007. Now ushering in its 30th year, the school’s reach has extended beyond North Texas across the nation through online programming and diocesan partnerships. It is among the nation’s largest and best-known Catholic ministry schools, with courses often offered in both English and Spanish, taught by nationally recognized faculty.

“The Ann and Joe O. Neuhoff School of Ministry looks forward to its future under this new name,” said Whapham. “Our hope is that students, like the Neuhoff family, will be inspired to grow in faith and be of service to the church.”