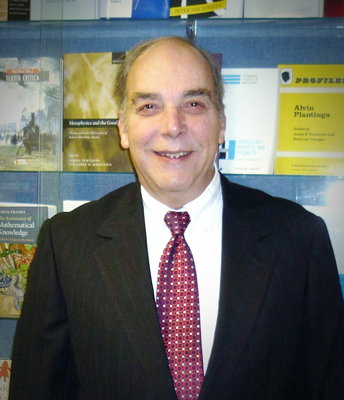 Alfred J. Freddoso, Ph.D., philosophy professor and Aquinas scholar, will deliver the second annual Scherer Lecture on “The Vindication of St. Thomas.” The event, which will be held Friday, March 18, at 7:30 p.m. in the Art History Auditorium, is free and open to the public.

Freddoso is the John and Jean Oesterle Professor of Thomistic Studies at the University of Notre Dame. His academic interests center on metaphysics and ethics in the Catholic philosophical tradition.

"Like the great minds of the medieval period, who have been the focus of his research and teaching for years, Professor Freddoso recognizes faith and reason as a pair of wings elevating the human mind to the contemplation of truth,” said Associate Professor of Philosophy Matthew Walz. “Thomas Aquinas in particular is exemplary for him, so much so that Professor Freddoso has undertaken (and to a great extent completed) a translation of Aquinas' entire Summa theologiae -- a monumental task, to be sure, but one for which he is particularly well-suited. It will be a pleasure to hear his thoughts concerning Aquinas' surprising significance in the contemporary philosophical scene."

Freddoso will discuss how, 50 years after the overthrow of St. Thomas Aquinas and Thomistic scholasticism in Catholic intellectual life, we are now witnessing a surprising revival of Aristotelianism and Thomism in a place where one would have least anticipated it: secular Anglo-American analytic philosophy. One example of this trend can be found in “philosophical anthropology,” the study of human nature and the human condition. This revival, in both philosophy and Catholic theology, offers hope to a new generation of intellectually mature Catholics.

“Professor Freddoso knows both Anglo-American analytic philosophy and the Catholic philosophical tradition from the inside out,” said Associate Professor of Philosophy Lance Simmons. “The connections he sees between them are real, and hearing him explore them should make for an exciting evening.”

The Scherer Lecture honors the late Mary Scherer, daughter of Frank and Jean O’Brien of St. Louis, longtime friends and benefactors of the university and parents of several UD students. It is sponsored by the Politics Department and the American Public Philosophy Institute (APPI), a group of scholars from various disciplines and universities that seeks to give natural law theory a more salient expression in current scholarly and public discussions. The APPI, which was founded in 1989, moved to the University of Dallas in 2014.