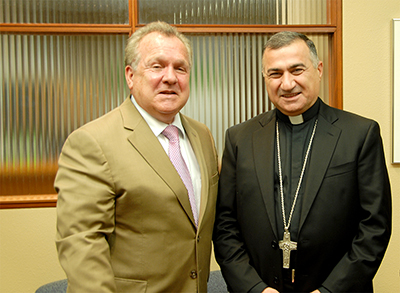 Dedicated to helping bring his country out of civil unrest, Bashar Warda, the Chaldean Archbishop of Erbil in northern Iraq, made a recent trip to the United States to receive his 2016 Pope Francis Charity and Leadership Award in New York while raising funds for and awareness of the humanitarian crisis currently plaguing Iraqi Christians in his homeland.

Archbishop Warda’s trip also included a stop in Dallas on behalf of Bishop Greg Kelly, a visit to the University of Dallas and a meeting with President Thomas W. Keefe.

“The archbishop of Erbil, Iraq, is committed to helping heal the wounds that have festered in the Middle East for decades, and he believes education is the surest path,” said President Keefe. “He came asking for the university’s assistance by providing access to graduate education for their students once they complete their undergraduate studies. I told him that was, of course, a no-brainer and that the University of Dallas is committed to helping him in any way we can.”

Where once 1.4 million Christians lived, there are now just a little more than 200,000 in Iraq due to decades’ worth of continued violence, suffering and religious persecution against Christians by the radical Islamic State (ISIS).

To date, hundreds of thousands of Christians have either fled Iraq for countries such as the United States and Germany or have been killed by radical extremists. And Iraqi Christian families who’ve remained despite these ISIS-led attacks have become refugees in their own country. Those who stayed largely fled to the Chaldean Catholic Archdiocese of Erbil, one of the few safe havens left in the country now fighting for religious survival.

“There will always be Christians in Iraq,” Warda told The Catholic News Agency.

Religious persecution against Christians isn’t a new issue for Iraq, but through education Warda believes that they can build an accord among all Muslims and Christians, regardless of any religious preferences. Currently, some 90 percent of students in these schools practice different religions.

“While the fighting rages within 17 kilometers of Erbil, Archbishop Warda is building bridges, metaphorically, while so many are trying to destroy them,” said President Keefe.

Iraq has long been in the international spotlight because of violence that has persisted for decades. Longtime friend of the University of Dallas (who recently spoke at the university’s 2016 spring commencement and at this year’s Dallas Ministry Conference) John Allen Jr., editor of the independent Catholic news site Crux and senior Vatican analyst for CNN, authored The Global War on Christians, which illuminated the horrific religious violence taking place against Christians around the world, including in Iraq.

“Christians today indisputably form the most persecuted religious body on the planet, and too often its new martyrs suffer in silence,” said Allen in The Global War on Christians.

Archbishop Warda, who’s now one of the last practicing Catholic bishops to remain in his country following the ISIS takeover of Mosul, stands at the forefront of the suffering. In Erbil, they have given thousands of refugees safe harbor, and thus far Archbishop Warda has helped raise more than $31 million in funding from the Aid to the Church in Need, as well as 16 other Catholic organizations from around the world.

"We believe Archbishop Warda is doing the work Jesus called for us to do, and we’re blessed to have the opportunity to participate in a small way,” said President Keefe.