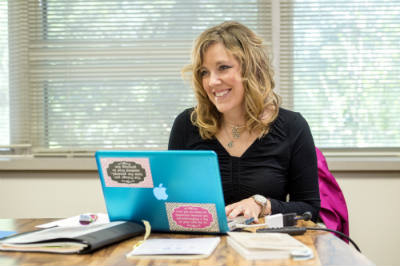 After completing nearly seven years of study in the Master of Pastoral Ministry program at the Ann and Joe O. Neuhoff Institute for Ministry & Evangelization, Debra Neely has reached the finishing line. A Nebraska native who has worked in the Diocese of Fort Worth for over 15 years, Neely has been working as a Catholic campus minister at Midwestern State University in Wichita Falls, TX.

Neely’s passion for ministering to college students inspired her to pursue her master’s degree, and for her capstone – the culminating project of the MPM – she reflected on her deeply transformative experiences of accompanying college students on mission trips, oftentimes to far-off places like Guatemala. Her particular focus? What happens after a mission trip.

Such service can form new faith in others and transform the faith of the missionary, as Neely herself witnessed when she took a group of students to Mexico in 2008.

“It was a fantastic eight days,” Neely said. “What I didn’t expect was that students wanted to change their lives. There’s so much that happens when they come back.”

After another such mission trip, this time to Guatemala, Neely witnessed several of her students change their majors to prepare to work for the church or other missionary organizations.

Reflecting on these experiences, Neely honed in on the importance of the transition from mission back into day-to-day life and how de-briefing from mission trips plays a crucial role.

“There needs to be some type of discussion forum for post-mission reflection. There’s no going back to your regular life, because you’re not the same person,” she said.

As part of her research for her capstone project, Neely created a Facebook group for the students who had gone on the mission trips together to serve as a forum for post-mission reflection. She posed questions in the Facebook group like “how did your perceptions of the world change after your mission experience?” Nearly 90% of the students responded, eager to share their experiences with one another.

Students wrote messages like, “Guatemala started my path… My heart will be forever changed by my short seven day trip there.”

Neely also found that after surveying students, 80% strongly agreed that their “perceptions of the world changed” and 65% strongly agreed that they were “more aware of the socio-economic gap.” 100% said that they would go on a mission trip in the future. Citing research from the Catholic Volunteer Network, she noted that of those who have participated in missions, 67% expressed that mission experience was somewhat or very important in their choice of career and 37% have considered a religious vocation.

This empirical data bears a strong tie to theological principles that are present in our everyday life. By virtue of our baptism, Neely explained, we are all called to do mission work in some way — not just in other countries or with other cultures — but so as to understand and participate in God’s plan for us. It is not only in the experience, but also in the reflection that such experience prompts, which allows us to discern God’s presence in mission activity.

When asked what she wants to do with her experience at the Neuhoff Institute for Ministry & Evangelization, Neely’s answer was simple.

“Being a light of Christ to someone else can make others want to do something similar in their lives. Sharing what I’m doing, being transparent and talking about my experiences makes all the difference.”

With the presentation of her final “capstone” project in early April, all that is left now for Debra Neely is to receive her well-earned diploma, but we have every reason to suspect that her missionary spirit will present new adventures for her and the students at Midwestern State in the future.