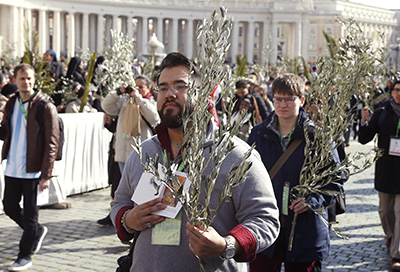 The week of March 19, University of Dallas alumnus and Director of Campus Ministry Nick López, BA ’12 MTS ’16, along with his fellow alumnus Katie Prejean McGrady, attended a pre-synodal gathering of young people in preparation for the upcoming Synod on Young People, the Faith, and Vocational Discernment. López was even asked to address the gathering, including Pope Francis, at the request of the Vatican Synod Committee.

“The highlight of the trip was delivering the address before the pope,” said López. “Lay ministers in the United States don’t get as much vocational affirmation as a priest, so it was great to receive the affirmation of the bishops for the work I’ve done only four years in.”

He was one of five international representatives asked to deliver an address on the state of young people, and he represented the whole of the Americas, including South and Central America, because Europe views both continents together as the “Americas.” Before he wrote his address, López, with the help of USCCB Assistant Director for the Secretariat of Laity, Marriage, Family Life, and Youth Paul Jarzembowski, was able to receive input on the state of young people throughout South America from various ministers and colleagues from those countries.

“The input helped me shape my speech and be able to see that people were willing and able to discuss young people on a deep level. They knew how important this synod was,” said López. “I loved seeing how the church was able to work together and help me out in this situation.”

When it came to addressing his fellow delegates who represented dioceses across the world — not to mention Pope Francis and numerous cardinals and bishops — López didn’t feel nervous. In fact, Pope Francis’ entrance was one of the reasons he felt such ease.

“He came in unannounced, and he didn’t care for any of the formalities; he just walked right in,” said López. “It was special to see the authenticity of his greeting. When the pope walked into that room, there was zero pressure and no intimidation. He exuded a personality that gave off none of those vibes. As soon as I saw him I knew everything was going to be OK. He exudes this humility that is indescribable. I was comfortable to go up and talk simply because of who he is.”

Since he was representing the Spanish- and English-speaking Catholics, López opened and closed his remarks in Spanish because, as he said in his address, “Porque ahora mas que nunca es importante que mostremos nuestra solidaridad y unidad con Ustedes, nuestros hermanos y hermanas de cada Nacion de Latina America,” which translates to, “Now more than ever, it is important that we show our solidarity and unity with you, our brothers and sisters of every nation of Latin America.”

In his address, López highlighted the feelings of uncertainty present among young adults, including UD students.

“In my fourth year as campus minister at the University of Dallas, I have found that if there is one overall theme that highlights the life of a young adult, it is transition — moving, choosing, experimenting, failing, succeeding, fearing and hoping that that next steps we make are the steps that God is calling us to make,” he said. “The life of the young person is riddled with potential changes. And the mere existence of these changes is cause for great stress and anxiety in the hearts of our young people. Anxiety often arises from not transitioning into these areas as quickly as we are expected to.”

Afterward, López was again greeted by the pope and given words of affirmation.

“With a giggle of approval, the pope said, ‘Hablaste muy bien — muchas gracias,’ which means, ‘You spoke very well — thank you very much.’”

The words of affirmation did not come only from Pope Francis, however.

“Every single day for the next six days, people would not stop coming up to me and telling me how important my speech was to them, even people not from North or South America,” said López. “That’s what really affirmed us meeting together in the first place. Even though I was representing North and South America in that speech, so much of young persons’ lives is so similar, and our needs are so strongly connected, that the speech was able to speak to a lot of other people.”

For the next six days, López worked among small groups tasked with crafting a document to be read before the upcoming October Synod of Bishops in Rome.

"Being able to see that there was so much connection among us was so impactful," he said.