Strengthening and enriching our communities, both local and global, is an important part of living with a dedication to truth and virtue. We seek to nurture not only our own families but also our human family. Both near and far, UD students, faculty and alumni live out this commitment to truth, to virtue, and to humanity as a whole in various acts of service, helping others to improve their lives and always improving their own in the process. In “UD in Service” stories, we will explore these occasions of hope, faith and inspiration.

Last year, when Hurricane Harvey hit, Houston, Beaumont and surrounding areas endured a natural disaster of unforeseen proportions. The process of rebuilding has been long and arduous, and this past spring, UD’s Alternative Spring Break program took students down to Beaumont to join in the efforts through Operation Blessing, the division of Catholic Mission Trips in charge of Hurricane Harvey relief. 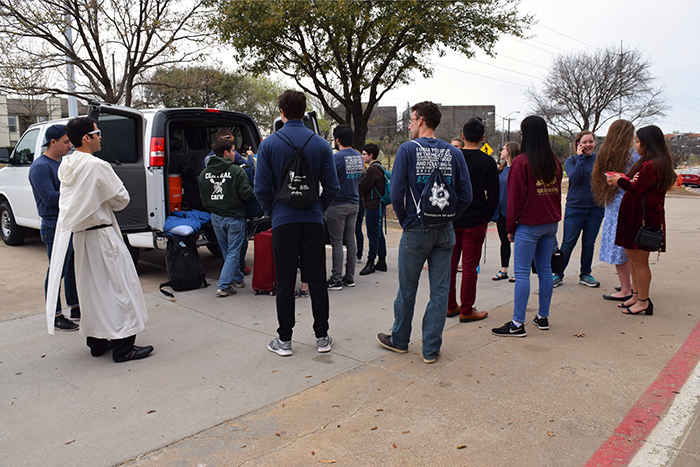 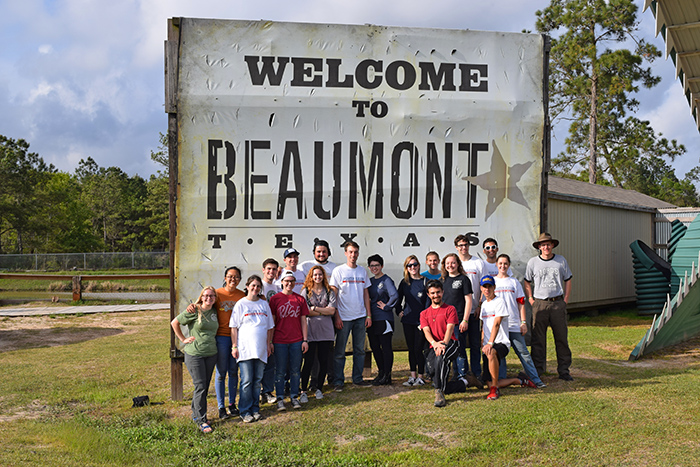 The experience of ASB began several months before they left, with team-building opportunities and meetings. Then, there was the long drive down to Beaumont, which they spent continuing getting to know each other, sharing music and playing games. Once there, they worked at various sites each day, including debris clean-up, making new flower beds for a church, tearing up house floors, putting up new drywall, painting and overall demolition. Each day, they ate communal meals, including sack lunches, prepared by Operation Blessing.

“Each day held something new,” said Kelsie Kent, BA ’19. “One day we walked along the road of a neighborhood picking up debris and various belongings that had washed out from the houses and were buried in mud all over the yards. Another day our group was assigned to work inside a house clearing out debris, carpet, tile and insulation. On our last day, some of us went and worked at a local food bank.” 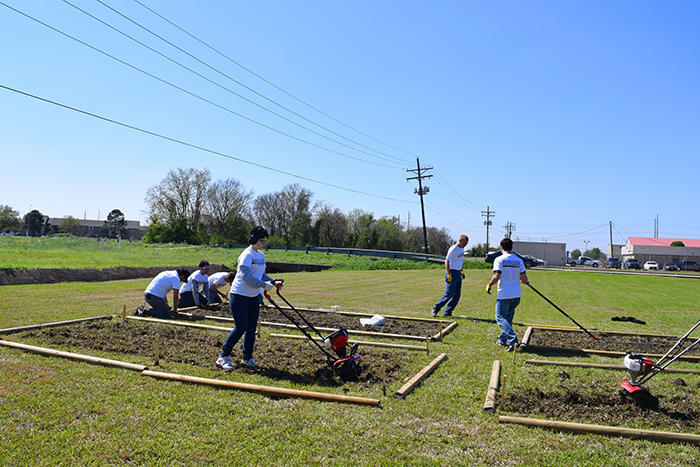 For pastoral ministry major Stephen Williams, BA ’18, seeing the devastation in person was a revelation.

“One resident pointed out markings on the roofs that showed how far they’d been submerged,” he said. “I realized that during the hurricane, all of what we could see would have been under water; it made me really understand why they needed us so much. It showed me what really happened there; it’s hard to imagine the impact.”

“Anyone can hear about these disasters on television or on social media, but to walk through the area and imagine what happened was something else,” agreed Caroline Fangman, BA ’18, a business major who will graduate in December. She decided to apply for ASB when she learned that they would be helping Hurricane Harvey victims, knowing that otherwise she would probably have spent spring break just watching Netflix. 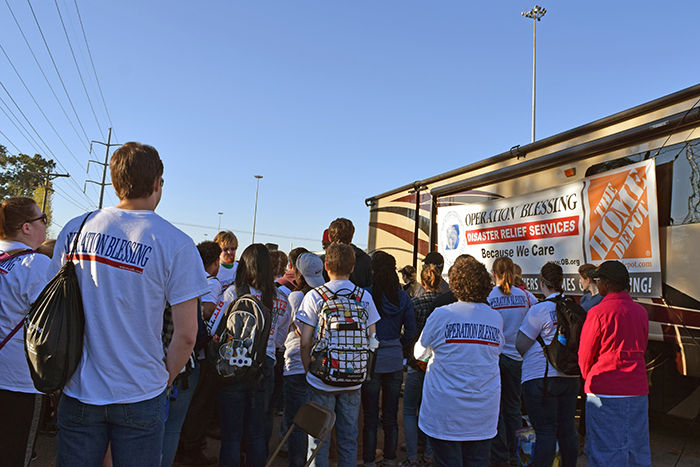 “One neighborhood we walked through was mostly deserted, the homes having been completely under water and therefore uninhabitable,” added Fangman. “It was so incredibly humbling. One woman told our group that within a few days, the water had reached heights of 50 feet near her house. Everything she owned was ruined. That statement really struck me because I’ve never experienced a natural disaster or lost everything I owned, and I have no idea what it would be like to experience that.”

“Part of the reason the work we were doing was so rewarding was because we spent the time not only developing relationships with one another, but taking the time to talk to the locals we met along the way,” said Kent. “There is nothing more important than stopping to listen to someone's story and ask them how they’re doing, and the people we were able to talk to were refreshingly honest.” 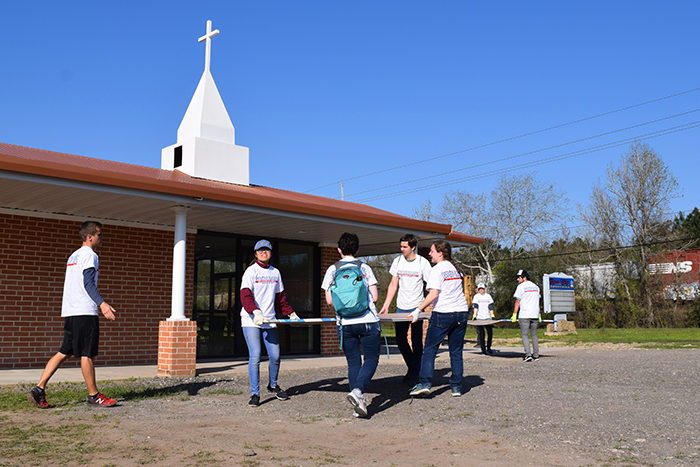 Even a year after the floods, the community is still recovering, and they probably will be rebuilding for a few more years. The residents were extremely grateful for the help they received.

“So many residents pulled up to talk to us and thank us, including the mayor — who even offered up the port-a-potty in her yard,” said Williams.

“The people still in the town were so gracious for our support and volunteer work, and I hope they keep getting help to rebuild their community,” said Fangman. “It was refreshing to see so many people willing to help, even coming all the way from the top of the U.S. to do so.”

Somehow, too, the work didn’t feel as tedious as it could have.

“The work that our team was doing should have been, objectively speaking, extremely boring and tiresome,” said Kent. “But our experience was not like this at all. Each day we had the energy to carry us through the day and had a blast doing whatever Operation Blessing had us doing that particular day.” 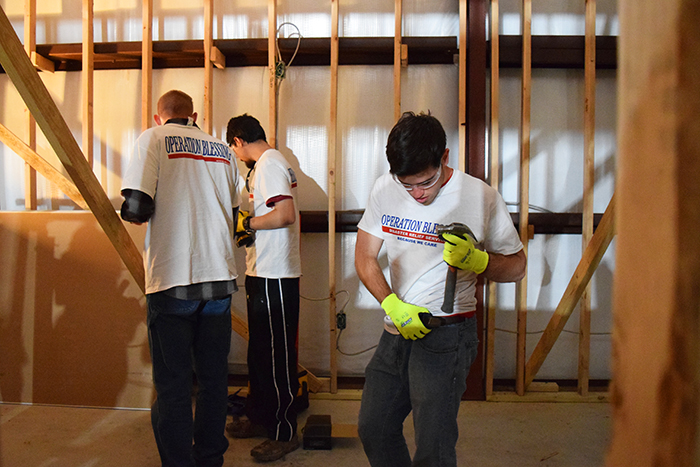 Kent, a theology major, participated in ASB as a first-semester senior; she will not complete the second semester of her senior year until spring 2019 because she is currently spending six months in the Caribbean doing missionary work with Experience Mission.

“I can pinpoint the exact moment my senior year of high school when I felt the call to do mission work, but it wasn't until this past year that that draw was able to unfold,” she explained. “As I was deciding whether to participate in ASB or not, I was also discerning whether to embark on a long-term international mission trip. It was actually my decision to work with Experience Mission that cinched my decision to do ASB: Too often, people embark on international mission trips having no background or real idea of what it means to do mission work. It is often forgotten that although international missions are important, there is also so much work that can be done on the local level. I knew that if I was going to spend six months of my life in missions, I should probably begin with a single week. I am incredibly grateful I did!” 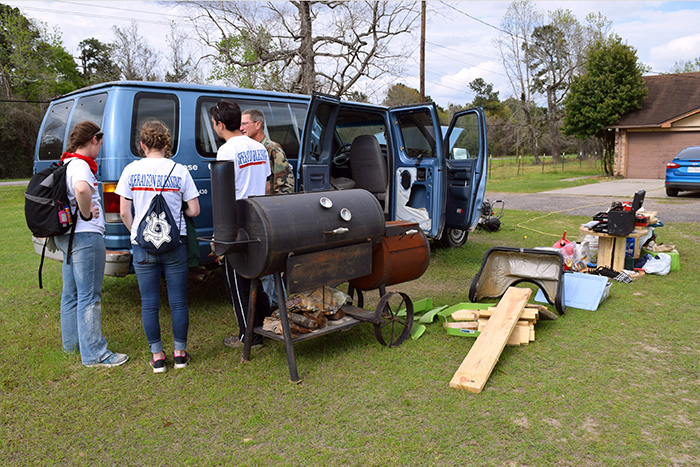 The fellowship among the students in the program was profound and added a whole other layer of value to their experience.

“When strangers get together and do work for God, they bond in such a unique way,” said Williams. “We bonded so quickly through the work, and a community was created. We’ve already had several reunions. We share jokes and prayer requests.”

Additionally, UD’s campus chaplain Father Thomas More Barba went along on the trip and worked alongside the students.

“It was nice to see a priest get out of garb and get dirty,” said Williams. “That was awesome. We’re lucky to have a younger priest.”

“After working for the bulk of the day, we went back to site to shower and eat. Each day Father Thomas More celebrated Mass for us, and afterward we would all come together to play multiple rounds of Secret Hitler, our favorite card game,” said Kent. “It was strikingly easy to be present with one another in the simple moments like these. Although we went into the week not knowing each  other well, we got along like old friends.” 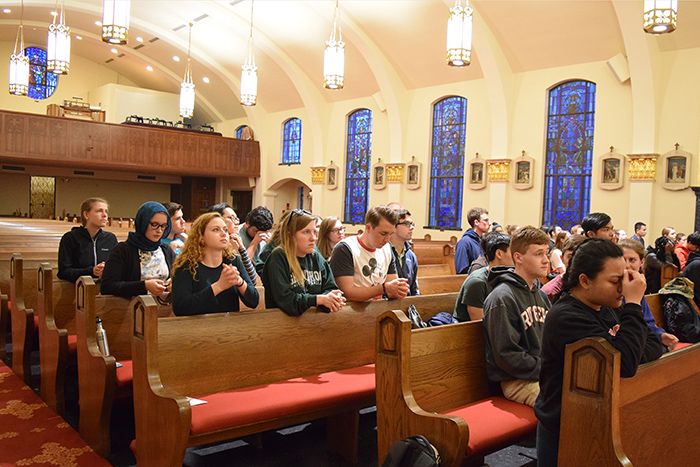 Spending spring break this way, doing such grueling work — including helping to gut houses that couldn’t be saved — and sleeping at night on cots in classrooms, was certainly a sacrifice, but Williams would do it again; he is also interested in doing this type of work in foreign countries.

“I would absolutely do work like this again; participating in ASB has truly sparked my passion for missions,” said Kent, who currently, of course, is doing similar work in the Caribbean, and might work more permanently with Operation Blessing after she graduates. “This type of work brings me so much peace and joy.”

“I would definitely do it again,” said Fangman. “The smiles on people’s faces when we helped them were irreplaceable. Also, our team became really close-knit throughout the journey, and I’ll carry those memories with me forever.”

Learn more about Alternative Spring Break. The team for the spring 2019 trip will be selected in October.