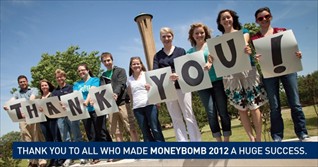 UDs innovative, grass roots style fundraising effort, Money Bomb, proved to be a success, raising nearly $75,000 from more than 500 donors. The three-day event, which took place from May 10-12, used a peer-to-peer fundraising model with alumni encouraging and challenging other alumni to financially support the university. Funds raised during Money Bomb will support student programs, campus enhancements and faculty salaries.

One of the most impressive aspects of Money Bomb is the number of gifts that came from younger alumni, said Vice President of Advancement Amanda Rainey. Out of 564 gifts, more than 400 were from the classes of 1999 or later.

At the heart of the mini-campaigns success were more than 60 alumni who challenged others to make gifts during Money Bomb by offering additional gifts when specific goals were met. Among the challenges were those from the classes of 1972, 1980, 1990, 1995, 2009, 2011 and the decades of the 90s and 00s, as well as the School of Ministry.

Thanks to an extremely dedicated group of alumni volunteers, we were able to raise a significant amount in an extremely short period of time. For their efforts, Money Bomb was a resounding success.