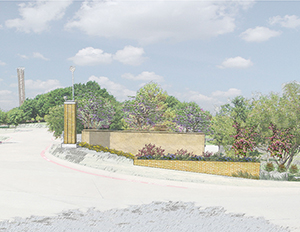 As a show of support for the university's Campus Transformation Project, the National Alumni Board's (NAB) 24 members pledged $100,000 to construct one of five new campus entrances. Gateway D, which will now be known as Alumni Gateway, will be located along Tom Braniff Dr. at the Catherine Drive entrance. The announcement was made during the NAB's September meeting.

"The NAB is honored and excited to be a part of this transformative project," said NAB President Mary Rossi Ritter '85. "Alumni Gateway will be a permanent, visible reminder to current students of the thousands of alumni who have entered this campus before them, and whose ranks they will someday join."

"Alumni Gateway will be an inspirational symbol of a powerful network of generous UD alumni who are still very much a part of this university," said Ben Hart, executive director of development and alumni relations.

The Campus Transformation Project includes construction of an elevated walkway that provides a more direct route from the University of Dallas DART station to the center of campus and renovations to the Haggar University Center, as well as the new campus entrances or gateways.

Visually, the collection of gateways will mimic the feel of existing campus structures designed by O'Neil Ford, which, for the most part, are unassuming and unadorned, yet elegant. Each will incorporate masonry pillars constructed of a light-colored brick similar to that which faces many of the buildings that line Braniff Mall, as well as natural milsap stone planting beds filled with native shrubs and flowering annuals. Most will feature copper accents and distinctive monument signage.