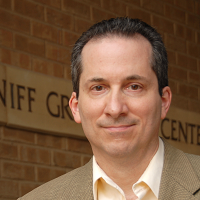 The Braniff Graduate School of Liberal Arts moved into a new era on Monday, June 17, as Professor of Philosophy Joshua Parens officially reported to his new post as dean. He takes over the leadership role from David Sweet, who served as the school's dean for 12 years.

"Dr. Parens is both a distinguished scholar and an instrumental leader at the University of Dallas," said President Thomas W. Keefe. "I look forward to his tenure as dean."

"Throughout his years with the university, Dr. Parens has been very active in the university's service, most notably directing the graduate program in philosophy and contributing to our regular accreditation processes," said Bill Berry, executive vice president and provost.

Parens, in addition to serving as director of the graduate program in philosophy, has taught at the University of Dallas for 16 years. A noted medieval Jewish and Islamic scholar, his most recent book, "Maimonides and Spinoza: Their Conflicting Views of Human Nature," was published by the University of Chicago Press in 2012. Parens' expertise extends to early modern and political philosophy and metaphysics.

"I'm excited for this opportunity to serve Braniff," said Parens. "During my first year, I hope to devote much of my attention to enhancing our master's degree programs, before turning to the program that differentiates us from most others, the Institute of Philosophic Studies. Above all, I hope to gain further support for graduate students."

Parens earned a bachelor's degree from St. John's College and master's and doctoral degrees from the University of Chicago. During his tenure at the University of Dallas, he has served on numerous committees and currently chairs the Research Sub-Committee for UD's Southern Association of Colleges and Schools (SACS) re-accreditation.