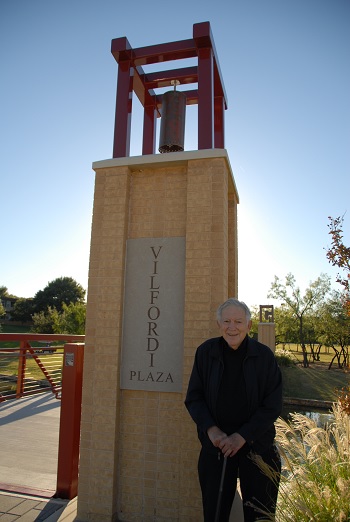 UD recently broke ground on the final phase of a $4.2 million Campus Transformation project the construction of five new campus entry ways, a University of Dallas DART Station entry plaza and a pathway connecting the station to the core campus.

"The University of Dallas is thrilled to have begun the final phase of this multi-million dollar campus transformation project. Its completion, along with our record enrollment, recent AACSB Accreditation and new DBA program, is one more sign of the revitalization taking place at the university," said President Thomas W. Keefe.

Fundraising was completed after the university successfully met a $500,000 challenge grant issued by the J.E. and L.E. Mabee Foundation that required it to raise the remaining $1 million of the initiative's $4.2 million cost in less than 12 months.

The entry plaza, Vilfordi Plaza, is named after long-time UD trustee and Dallas/Fort Worth philanthropist Gene Vilfordi. It will be connected to the campus core by a walkway that will enable students to more easily access the DART Orange Line and make the university more accessible to the greater community. Vilfordi Plaza, which will be located at the corner of Tom Braniff Dr. and State Highway 114, will feature lush landscaping and an arched footbridge over a pond and fountain.

In addition, gateways will be constructed at each of five major campus entrances along E. Northgate Dr., Tom Braniff Dr. and State Highway 114. Collectively, they will create a distinct visual boundary that identifies the campus as the University of Dallas. The gateways will incorporate brick pillars with copper accents, as well as natural milsap stone planting beds filled with native shrubs and flowering annuals.

The Campus Transformation Project's initial phase was completed in August 2012 with renovations to the Haggar University Center, which included a remodeled residential dining hall, as well as renovated restrooms, a new visitors' center and upgrades to study and common areas. The university anticipates all projects to be completed by early 2014.