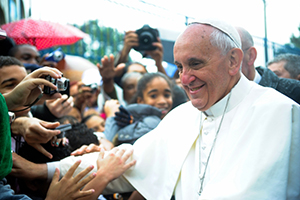 In his lecture, titled ""Church Communication in the Age of Francis," Wauck emphasized Francis' personal and pastoral approach to communication.

"Benedict was content to let the message speak for itself. He treated himself as irrelevant to the truth," said Wauck. "But with Francis, something else is happening."

The bottom line, according to Wauck, is that Francis' communication style is centered on the authenticity of the direct pastoral approach.

"The Holy Spirit is guiding the Church and giving it what it needs at each moment in history," said Wauck.

In response to a question, Wauck stressed that interpretations of the pope as a progressive intent on changing church teaching are "wishful thinking."

Wauck has appeared frequently as a television commentator on matters dealing with the Catholic Church. He has written for many publications, including The American Scholar, The Christian Science Monitor and The New Criterion.