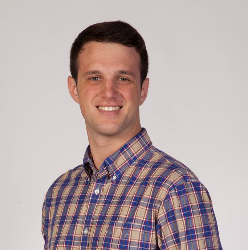 The University of Dallas Cor Fund provides scholarships to hundreds of UD students. We are sharing some of their stories. Donations to the Cor Fund come from alumni, parents and friends of UD.

"I've been looking at the stock market since I was about 12 years old," said rising senior Will Chavey, BA '15. "I got shares of Microsoft as a Christmas present at some point in middle school. And that passion for business never left."

Chavey is spending his summer interning at Goldman Sachs. He hopes that this might lead to a full-time position after graduation; he knows that he wants to work in private equity, consulting or wealth management.

"I love that type of work," said Chavey. "Plus, I want to eventually own my own business, so five to ten years in this type of profession would be beneficial."

An economics major with concentrations in applied mathematics and political philosophy, Chavey learned about UD from his older sister, who is an alumna, and decided to come here because of the community and the liberal arts education, not to mention the Cor Fund scholarship he received.

"People often ask how a student from Ann Arbor, Michigan, ended up at the University of Dallas," Chavey said. "I usually tell people the basic answer: I loved the idea of a liberal arts education, particularly that it has breadth and teaches you how to think. Since then, I have come to appreciate the holistic benefit much more tangibly. I'm learning universal knowledge. I'm so grateful for this education, which has rounded me out as an individual and improved my ability to inquire intellectually."

Chavey is a co-founder of and student analyst for the Student Managed Investment Fund (SMIF) and a co-founder of the Investing Club. It doesn't come as much of a surprise, then, that his hobbies include investing; he researches and writes articles for the "Motley Fool," including pieces syndicated to Yahoo Finance and MSN.

He also took part in the Hertog Political Studies Program, a six-week full-scholarship honors program for college students, in the summer of 2013.

"The advantage of the Hertog Programcombined with my politics classes at UDis that I now feel comfortable contextualizing how and why people all over the political map make the arguments they do. It gives me a much more dynamic worldview and understanding of public discourse," said Chavey.

During his time at UD, Chavey has also been the Student Government president; co-founded UD's chapter of the Alexander Hamilton Society, of which he was vice president his junior year and is now an adviser; been a copy editor of The University News; earned an all-conference in discus as a member of the track and field team; been vice president of fundraising for Crusaders for Kids; and interned at the Speaker's Office in Washington, D.C.