UD Mathematics Department Number One in Percentage of BAs to Later Earn Ph.D.s

UD Mathematics Department Number One in Percentage of BAs to Later Earn Ph.D.s 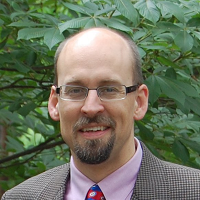 The Council of Independent Colleges (CIC) looked at the percentage of mathematics and statistics baccalaureate graduates from 2001 to 2005 who went on to receive doctorates in mathematics or statistics in 2006 to 2010 and found that UD, at 29 percent, had the highest percentage of the institutions surveyed.

Associate Professor of Mathematics David Andrews said that he wasn't too surprised by this, having done some research of his own a few years ago out of simple curiosity.

Andrews believes that UD's program guides its students toward this path in part with the curriculum: mathematics majors are required to take, in their sophomore year, a course called "Linear Point Set Theory," a "bridge" course in which mathematics majors move from the foundations of mathematics where everything is still straightforward to more advanced concepts such as proving theorems.

"The first time a student gives a proof, there's always going to be a logical hole," said Andrews. "The professor is there to ask questions that guide the student to finding that hole and resolving it. This introduces students to the creative side of mathematics early on, and that's something that's unique to UD."

The Mathematics Department uses what is known as the "Moore Method," a Socratic method of teaching devised by a former University of Texas professor named R.L. Moore who, according to Andrews, turned a lot of students into great mathematicians. With this method, students are posed problems to which they must find and prove the solutions. A former student of Moore's, Charles Coppin, joined UD's Mathematics Department in 1968 and taught here until 2002, during which time he imbued the department with this way of doing things.

"This method gets students excited and makes them take responsibility for their learning; they truly engage in the subject and take joy in it, and they want to delve deeper," said Andrews.

Another thing in UD's favor is that there are five full-time mathematics faculty and only five to eight mathematics majors each year, so each student gets plenty of individual attention and mentoring.

Overall, Andrews credits UD's Core curriculum, the foundation of approximately 23 courses required of every UD undergraduate, with the high number of UD mathematics majors who have gone on to earn their doctorates.

"In general, there's a willingness to think about big ideas at UD that is encouraged in all the classes; mathematics is just one aspect of that," said Andrews.