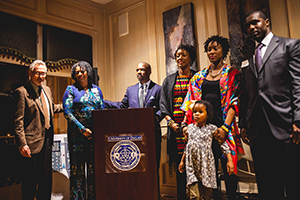 Former Dallas Cowboys fullback and University of Dallas MBA alumnus Robert Newhouse became the first inductee into the Satish & Yasmin Gupta College of Business Hall of Fame earlier this month. Newhouse was selected based on his exceptional career, commitment to academics and work-life balance. His wife Nancy and children, Rodd, Reggie, Dawnyel and Shawntel, accepted the award on behalf of Newhouse, who passed away in July 2014.

"We selected Mr. Newhouse as our first Hall of Fame inductee both for his outstanding career and his exceptional ability to multi-task, playing in the Super Bowl on weekends and then reporting for MBA classes during the week, all while raising a family," said Satish & Yasmin Gupta College of Business Dean Robert Scherer.

Newhouse played for "America's Team" from 1972 to 1983, graduating with an MBA in 1984 from what was known then as the Graduate School of Management. After retiring from professional football, he served the Dallas Cowboys organization in various administrative capacities including ticket sales, alumni relations and as a player programs director until 2008. Newhouse also served as a U.S. bankruptcy trustee for 26 years.

"My father was a wonderful man who cared deeply for his family, friends and colleagues," said son Rodd Newhouse. Education was so important to him and he would have been honored by this tremendous award of distinction bestowed by his alma mater, the University of Dallas Satish & Yasmin Gupta College of Business.

Newhouse, as well as future Hall of Fame inductees, will be honored in the college of business new home, the currently under-construction SB Hall. Inductees stories will be shared on the Wall of Honor, a display prominently located within the 45,000 square foot facility.

Candidates for the Hall of Fame are chosen based on a track record of exceptional achievement in their careers as well as their personal lives, and with consideration given to their significant contributions to advance the mission of the college of business. New inductees into the Satish & Yasmin Gupta College of Business Hall of Fame will be announced June 2015.