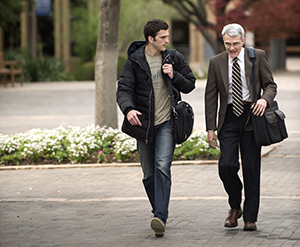 2015 King Fellow Wegemer is both UD's residence Thomas More scholar and a nationally and internationally recognized authority on More. He founded the university's Thomas More Center, a think tank and scholarly resource for all things Morean, and organizes an annual conference on More at the university. His most recent book "Young Thomas More and the Arts of Liberty" was published by Cambridge University Press. He is beloved by students and alumni for his patient good cheer, detailed comments on student papers and his availability. His colleagues respect his tireless service on Faculty Senate and innumerable committees.

"No one works harder for our students, a chosen figure of study, or the wider university community, often behind the scenes and without fanfare," said Provost C. W. Eaker.

The King Fellow Award goes to a faculty member who has taught in a full-time capacity for more than eight years. The recipient of what is considered to be the highest faculty honor must have also made a significant contribution to the university through scholarly work, excellence in teaching and as an exemplary colleague.

2015 Haggar Fellow Slaughter studies the biomechanics of human motion and its impact on human stability, including fall prevention in the elderly and the tracking of neuromuscular dysfunction. He appeared in the History Channel's show "Superhumans" as an expert in biomechanics and has an exhibit on motion at Dallas' Perot Museum of Nature and Science.

"The breadth of interests exhibited by this years fellow at UD resembles in many ways the broad nature of his education, as he has degrees in osteopathic medicine, computer science and science/visual arts. Those of you who have worked with this years Haggar Fellow know that he is a true UD Renaissance professor, although one with an earbud in place as he walks with a peppy gait of his own across campus," said William Frank, professor of philosophy and chair of the Faculty Senate.

The Michael A. Haggar Fellow Award is given to an outstanding junior faculty member who has served the university full-time for no more than eight years.

Student and alumni selected recipients of the Haggerty Teaching Excellence Awards, which recognize faculty for dedication and excellence in teaching. This year's winners are:

Gene Giuliano, affiliate instructor in the School of Ministry

King/Haggar Scholar Awards were presented to the following faculty members to support research and scholarly development:

Sabbaticals were granted to the following full-time, tenured or tenure-track faculty members: